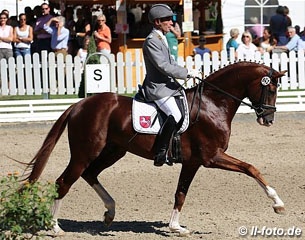 The 23-year old Schurmann made her first public appearance on the 8-year old chestnut Quaterhall (by Quaterback x Donnerhall x Walt Disney) at the K+K Cup CDN Munster at the beginning of January, where she brought him along for training.

Quaterhall is bred by Ulrich Kriebel and was ridden by Celle state stud rider Wolfhard Witte as a youngster. The duo finished fifth at the 2013 Bundeschampionate when the stallion was five and they were 14th in the consolation finals at the 2014 Bundeschampionate. The pair went on to compete up to Prix St Georges level.

Schurmann will now continue the show career of the stallion and has planned on competing him on the Nurnberger Burgpokal circuit for developing Prix St Georges horses.

Charlott Maria, who is coached by Klaus Balkenhol, is currently competing her number one horse Burlington W at international Grand Prix level. She is also riding his full brother, the 5-year old Burlington II (by Breitling x Rohdiamant).