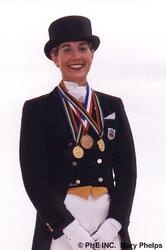 The Organizing Committee of the 2016 North American Junior & Young Rider Championships (NAJYRC) announced that the 2016 Championships will take place at the Colorado Horse Park, July 26-31, 2016.

This will be the fourth time the park has hosted the best Junior and Young Rider competitors from North America as they compete for prestigious Team and Individual medals. With unwavering support, Adequan will mark its sixth consecutive year as title sponsor of the event.