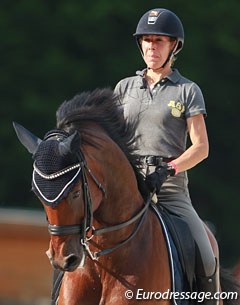 The French Grand Prix A-squad listed riders have been invited to ride in a 3-day training seminar with French team treainer Jan Bemelmans at the Le Mans equestrian centre on 18 - 22 January 2016.

For the first time in 20 years, French has qualified a team in all three Olympic disciplines (dressage, jumping, eventing) for the 2016 Olympic Games in Rio de Janeiro, Brazil, on 9 - 15 August 2016.

Sophie Dubourgh, the technical director of the French Equestrian Federation, has set the bar high and aims for France to get an Olympic podium place. In order to up the level of dressage in France, team coach Bemelmans will be closely following the team candidates who are submitted to the JO/JEM squad (Olympic Games/WEG squad).