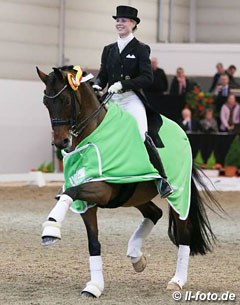 The CDN Munster K+K Cup is the annual indoor dressage and show jumping competition kicking off the new year in Germany. While this is only a national event, the location guarantees a big field of competitors as the Munster area is densely populated with riders, trainers and breeders. The CDN Munster is also the venue where German riders present their new horses or move their horses up a level.

The K+K Cup covers all levels of dressage, from ponies up to Grand Prix, mixed in with some young horse classes and a regional 6-year old championship. The event begins with a stallion show, followed by the actual competition.

The Grand Prix classes were won by Anabel Balkenhol on Dablino (by De Niro x Wanderbusch II), Patrik Kittel on Toy Story (by Come Back II) and Juliane Brunkhorst on Sieger Hit (by Sandro Hit). At small tour level for developing PSG horses Beatrice Buchwald steered Den Haag (by Diamond Hit) to victory in the Prix St Georges. Anabel Balkenhol aced the Inter I on Heuberger (by Imperio).

Our German photography correspondent LL-photo was on the scene taking photos of all classes.