Dream of Heidelberg I Passed Away 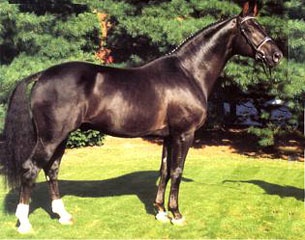 The Rhinelander bred breeding stallion Dream of Heidelberg I has passed away in August 2015 but the news of his death only now became public. The stallion was 24 years old.

Dream of Heidelberg I was bred in The Netherlands by Ruud Wolters and was sired by Donnerschlag out of Zoliante (by Heidelberg x Leonidas). The stallion was last owned by the Vienna based Manfred Hödl.

He was first shown as a 3-year old by Jorg Hohmann in a riding horse test. Two months later Heiko Munzmaier took over the ride and competed the stallion up to M-level. In July 1998 he did his last show in Germany at M-level. Belgian Philippe Jorissen briefly showed him at PSG level but in 2002 the stallion sold to Marlène Hödl in Austria. Colic surgery due to inguinal hernia led to the stallion's castration and the early ending of his sport career that same year.

As a breeding stallion Dream of Heidelberg I was stationed at Gestut St. Ludwig. He has 211 offspring registered as sport horse in Germany; eleven of them have reached S-level. His most famous offspring in Victoria Michalke's Grand Prix horse Dance On and Jacques Albeck's Dormello. He sired 7 State premium mares and has four licensed sons, including D'Amour and Dream of Love.