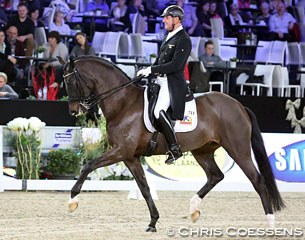 Dutch team rider Patrick van der Meer and his Dutch warmblood mare Coco Chanel were in commend of the small tour classes at the 2015 CDI Mechelen in Belgium on 27 - 28 December 2015. Van der Meer and the 8-year old dark bay mare won the Prix St Georges with 72.579% and the Intermediaire I kur to Music with 74.325%.

Van der Meer has been campaigning Coco Chanel (by Sandreo x San Remo) at small tour level for the past two years and the duo was also victorious at last year's CDI Mechelen.

"Coco Chanel also won both small tour tests last year. She knows all the Grand Prix movements but she's only 8 and I'm building her slowly," Patrick commented. "The owners are great people who don't put any pressure. She's a quite sensitive but also a real show horse. When I enter the ring at A she pricks her ears and goes for it."

Van der Meer enjoys coming to Mechelen where the atmosphere is always very electric and festive with the Christmas holidays going on.

"Mechelen is a great show for me, a nice atmosphere but quite busy, which is something riders and horses have to learn to deal with," Van der Meer explained. "I celebrated Christmas at home and on boxing day we came to Mechelen. It's only a two hour drive. The children are on holiday and they came along for the day."

Tommie Visser and has ride of half a year, the Dutch warmblood licensed stallion Bojengel (by Uptown), were second twice. They scored 71.211% in the Prix St Georges and 72.125% in the Inter I Kur to Music.