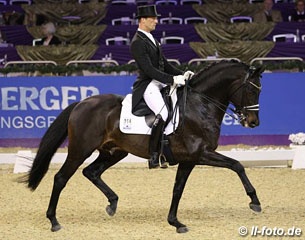 At the 2015 CDI Frankfurt, the first recipients of the Deutsche Bank Equestrian Sport Academy training grant, which can help high performance riders on their way to sportive and professional success, were announced. Ten dressage riders have received the grant.

German team trainer Monica Theodorescu and the dressage committee of the German Olympic Equestrian Committee (DOKR) nominated ten top dressage riders as first recipients of the grant.  They will get individual training, access to selected shows in Germany and coaching by mentors of the Deutsche Bank for the development of their professional dressage career. The best performing grant recipient will obtain a starting place at the 2016 CDIO Aachen in July.

One senior Grand Prix rider was also nominated, the 36-year old Munich based Hendrik Lochthowe, who finished seventh in the Louisdor Cup Finals on the developing Grand Prix horse Boston.

"For many years it was almost natural for German dressage riders to be part of the international top," said Jürgen Fitschen who is co-chair of the Deutsche Bank board. "However, the competition has become great. With the initiative of the Deutsche Bank Equestrian Sport Academy we want to contribute, together with the foundation German Sport Support, to the fact that equestrian sport in Germany nurtures top talent so they can connect with the international top."