Winning two of the three classes in U.S. Grand Prix
Dressage Championship at the Global Dressage Festival show grounds in Wellington, Florida was Laura Graves and Verdades, who added
their first ever National Championship title to a year of remarkable
success.

Earning their first ever National Championship title were Graves (Geneva, Fla.) and her own Verdades (by Florett As), who won two of the three division classes this week. The pair overcame some bobbles in day one's Grand Prix to score a 76.460%, accounting for 45% of its championship title. On day two, in the Grand Prix Special, the pair built on its lead with a fluid and dynamic test, winning with a score of 77.137%. On Saturday night the gelding showcased his great power, scoring 75.125% in a test that was not without its faults, finishing second in the class.

"He's been feeling really good all week and tonight was a demonstration of how much horse I have now," explained Graves. "I am still on a sharp learning curve and am still learning to ride that horse in that environment. This was our first outing [since the Pan American Games in July] and was a perfect opportunity to figure this out now going into our World Cup qualifiers. He is amazingly athletic and when he goes like that the feeling is unreal. We had some mistakes tonight, but I can't hold that against my horse." 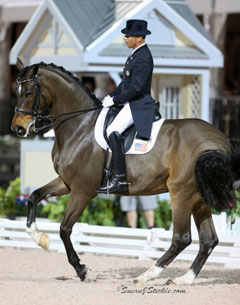 Speaking to the feeling of securing her first National title, Graves said, "I've never been close to this position before so it's a real honor. This is a really encouraging place to be as we begin 2016."

Remaining closely behind Graves in the division standings all week was veteran competitor and winner of the last four Grand Prix National Championships, Steffen Peters (San Diego, Calif.), with his Four Winds Farms-owned mounts Rosamunde  (by Rock Forever x Fidermark) and Legolas (by Laomedon x Florestan II). After disappointing performances for Peters on day one, he was ranked second with Legolas  and third with Rosamunde. Day two proved Peters' masterful ability to rise to the occasion. Rosamunde performed beautifully through the  Grand Prix Special, scoring a 74.549% and moving up to second on the leaderboard. Stablemate Legolas earned a 72.412% and dropped to third in the championship rankings by the slimmest of margins. Saturday garnered further positive results for Peters with Legolas  executing his crowd-pleasing Freestyle with music from U2 and Vanilla Ice to win the class. 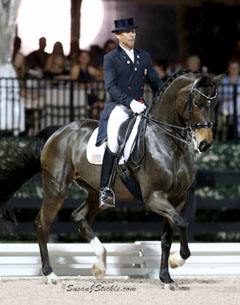 "I was super excited. It was one of his best Freestyles. I am so familiar with the routine and I thought even tonight I wasn't just with the music, but I was really with the footfall of every single beat."