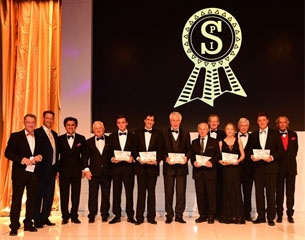 Each year at the beginning of December, the organizers and hosts of the world-famous P.S.I. Auction, Ullrich Kasselmann and Paul Schockemöhle, are honouring outstanding accomplishments in and around equestrian sports at the Saturday evening Gala Show. Seven personalities were given an award on December 5 at the P.S.I. Charity Gala Evening for the benefit of the aid organization “Riding against Hunger”.

Three awardees were presented right at the beginning of the event, representing a completely new category – the P.S.I. Award “Youth Rider of the Year”, presented by the Swiss privately owned bank Pictet & Cie. Not only sports successes, but also horsemanship and respectful handling of horses as partner of the rider are part of the evaluation criteria that count for this special award.

The 18-year-old prize winner Maria Madenova, for example, is competing with “Kleiner Onkel”, one of her top horses and “love of her life”. The Russian rider who has already been part of the team at the 2015 European Championships in Aachen, is member of the “Young Riders Academy”, and she already participated at 631 international jumper classes under the supervision of trainer Jeroen Dubbeldam.

The second young rider award was given to the 17-year-old Danish rider Emil Hallundbaek who is training with the team of “Absolute Horses”. Hallundbaek is 2015 Danish Young Rider Champion, Nordic Team Champion and Nordic U25 Champion.

The 19-year-old student of business education, Nicola Pohl from Marburg, is the third nominee in the category “Youth Rider of the Year”. The show jumping rider is convinced that everybody has an individual approach to doing good for others. She donates the biggest amount of her prize money to the club “Pferde für unsere Kinder e.V./Horses for our Children”.

The P.S.I. Award in the category “Sport” was given to Jeroen Dubbeldam. The Dutch rider was the second after Hans Günter Winkler to win all important show jumping championship – Dubbeldam is 2015 European Champion, 2014 World Champion and 2000 Olympic Champion. And he has already fixed his goal for 2016: the team gold medal in Rio.

The awardee in the category “Supporter“ also comes from the show jumping sector. Stefan Unterlandstättner – Managing Director of Deutsche Kreditbank AG, amateur show jumping rider, landlord and family father – was praised by FN General Secretary Soenke Lauterbach in his laudatory speech. Particularly his commitment with the well-known German show jumping series DKB-Riders Tour, the German National Equestrian Federation, the initiative “Vorreiter Deutschland” or individual events such as the DKB Federal Championships or the support for the DKB-riders deserve special attention.

Visionary Klaus C. Plönzke was honoured with the P.S.I. Award in the category “Media”. His basic affinity for bits and bytes and his passion for horses inspired the owner of Gestüt Tannenhof to establish an archive with animated pictures. In 2007, he founded Horse Media Solutions GmbH – the media company is running the Internet platform ClipMyHorse.TV and has since then been developing into market leader in the area of live broadcasting events of horse shows and breeding events in Germany. More than 240 events were broadcasted on the Internet in 2015. ClipMyHorse.TV has not only increased its reputation and importance in Germany, but also all over the world, highlighted Frank Henning in his laudatory speech. His event “Die Alten Meister/The Old Masters” is also shown online by ClipMyHorse.TV.

„A little man with cigarillo, in riding trousers and riding boots,“ this is the typical picture of Manfred “Manni” Kötter who was legendary trainer of many show jumping riders. Now he is the new owner of the P.S.I. Award in the category “Lifetime Achievement”. The 79-year-old “Manni” from Bramsche is a former German show jumping rider and trainer and had been working with the stable of Paul Schockemöhle for years. He trained the German riding soldiers at Bundeswehrsportschule in Warendorf at the turn of the millennium. Carsten-Otto Nagel and National Coach Otto Becker as well as National Coach Heiner Engemann trained with him. His current trainees are presenter Franke Sloothaak, Ludger Beerbaum, Marco Kutscher, Holger Wulschner and many other well-known show jumping riders. Kötter was caring for and riding the show jumping horses of the German team during quarantine before the 1996 Olympics in Atlanta. His team won the Individual as well as the team gold medal.

The Charity Gala Evening found more supporters in the course of the evening. The net proceeds of the initiative, inaugurated in 2012, will be given for the benefit of ”Riding against Hunger”. The guests had the opportunity to donate any amount desired on individually designed cards. The initiators Ulli Kasselmann and Gudrun Bauer (Bauer Media Group) can look forward to more donations for the benefit of “Riding against Hunger”. A gesture that will provide help right now before Christmas wherever it is urgently needed.