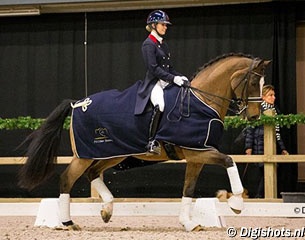 Towering over the competition on her Under 25 debut British youngster Charlotte Fry surprised herself with her double win at the 2015 CDI Roosendaal Indoor on 2 - 7 December 2015 aboard Anne van Olst's former Grand Prix Olympic mount Clearwater. Fry won the Under 25 Intermediaire II and Short Grand Prix with 69.254% and 71.442% and had a more than exciting introduction to Grand Prix level.

“I never expected to do so well my first time riding at this level; is it just amazing,” Charlotte told Eurodressage. “Clearwater was incredible in the arena, he has so much power and was very happy to be back competing again.”

The 17-year old Danish warmblood Clearwater (by Carpaccio) is owned by Danish Anne Van Olst and Dutch Ton Kies of team Exquis and is a horse with a huge personality and a very successful past. Under Van Olst he competed at the 2008 and 2012 Olympic Games winning team bronze in Hong Kong. He was also member of the Danish team at the 2007, 2009 and 2011 European Championships and contested the 2008 World Cup Finals and 2010 World Equestrian Games.

“He loves attention and has taught me more than any other horse. He has improved my riding so much," said Fry, who has been riding the horse on and off for the last year. “In the beginning I wasn't a strong enough rider to control all his power but in the last couple of months we have worked really well together. I am so grateful to the Van Olsts for this amazing opportunity and for allowing me to compete Clearwater at Roosendaal.”

Charlotte acknowledged that the transition from Young Riders to Grand Prix was a big step up for her, and the main thing she found was that the movements come so much quicker.

“I’m so lucky as I couldn't have a better school master to learn on," said the 19-year old Brit who has chosen for a professional career in riding.  “I am based in Holland working at Van Olst Horses and training with Anne Van Olst. I have been here for just over a year, riding 8-12 horses a day, with a big mixture of types, from 3 year olds to Grand Prix horses, all with top breeding and talent. It's such a great opportunity for me. I love it there."

With two years left in Young Riders, she is not thinking about seniors Grnd Prix just yet. Her current young rider's horse is the 11-year old gelding Z Flemmenco (by Flemmingh), which owned by Lottie's grandma Mrs Shewen. She has competed him at two European YR CHampionships, where they were the best British combination both times.

"I am hoping to train him up to U25 Grand Prix within the next couple of years," she explained.

“She is fairly new to the competition circuit but has the potential to be a very good Grand Prix horse within a short time. Hopefully we can also aim her at the U25 Grand Prix next year.”