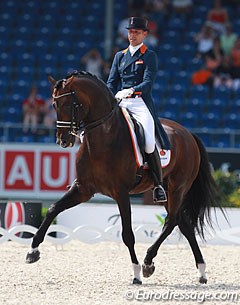 Hans Peter Minderhoud's European championship Special bronze medal winning mount, Johnson, has been added to the NOP Team which financially supports Dutch horses to prevent them from being sold abroad.

The NOP foundation, which stands for Dutch Olympic Horse, is supported by Rabobank and the Dutch Olympic Committee NOC*NSF and financially backs riders and owners to stimulate them not to sell their horses before the upcoming Olympic Games. They get a substantial amount each month to help cover the costs for training, transport, vet bills, etc.

Johnson, who was originally named Verdi when he got licensed as a 3-year old, is owned by Gaston Glock in partnership with Team Nijhoff.