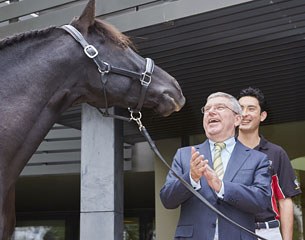 International Olympic Committee President Thomas Bach commented favourably on 4 November 2015 on the high level of compliance in equestrian sport with the 40 recommendations in Olympic Agenda 2020 during an official visit to the Fédération Equestre Internationale (FEI) headquarters in Lausanne (SUI), the Olympic capital.

“Olympic Agenda 2020 is the strategic roadmap for the future of the Olympic Movement and it is impressive to see how compliant the FEI and equestrian sport already are with many of the recommendations”, President Bach said. “We have targeted gender equality as a key goal of Agenda 2020 and equestrian sport has always been at the forefront on this, with men and women competing against each other for the medals.”

“Equestrian sport has been part of the Olympic movement since 1912 and the growth of the sport has been phenomenal, but it is good to know that the FEI was already working on a number of these areas, including good governance and a full review of the competition formats, even before we rolled out Agenda 2020. The sport touches many cultures and people of all ages and I have great admiration for what equestrian athletes achieve through the unique relationship between horse and rider, it’s truly awe-inspiring.”

During a presentation to the IOC President, FEI President Ingmar De Vos stressed how the FEI and equestrian sport are proactively embracing Olympic Agenda 2020. “We see it as an invitation to continue on the path we are already on to grow and develop the sport, a launch pad to further improve our sport and make it relevant in the modern sporting climate. We are confident that we tick many of the Agenda 2020 boxes, and we’re working hard to add the tick to the missing ones. We are pushing the boundaries, while respecting the traditions of our sport.”

Ingmar De Vos explained how the ongoing review of the competition formats, in full consultation with the member National Federations, athletes and stakeholders, is aimed at making equestrian sport more dynamic, easier to understand, and accessible for a wider fan base and for youth audiences. Sport presentation is also key and the FEI is continuing to work on development and further expansion of broadcast coverage of equestrian events.

The FEI Secretary General presented details on how the FEI operates, focusing on good governance and best practice, crucial elements for an international governing body. She also advised the IOC President that the equine health certificate which will ensure the safe import and export of all horses competing in the equestrian events at next year’s Olympic Games has been published today by the Brazilian Ministry of Agriculture (MAPA).

President Bach, German team gold medallist in fencing at the 1976 Olympic Games in Montreal, also met with three fellow Olympians – China’s youngest Olympic Eventer Alex Hua Tian, German Dressage rider Kristina Bröring-Sprehe, team silver medalist at London 2012, and Brazilian Jumping athlete Pedro Veniss, who is bidding to make a return to the Olympic stage on home soil in Rio. And there was a surprise equine athlete, the Spanish stallion Sarango, who greeted Thomas Bach and the athletes during the visit to FEI HQ.

“Equestrian is the only Olympic sport where men and women compete against each other for medals in all the disciplines,” Kristina Bröring-Sprehe said. “It’s only when you get a bit older that you realise just how special this is, and it’s one of the many reasons why equestrian sport is so popular with women of all ages. Knowing how important gender equality is to the Olympic movement, it’s been really empowering to talk to Thomas Bach about this today.”

“Eventing is my real passion”, said Alex Hua Tian, the man who carried the hopes of 1.2 billion Chinese at the Beijing 2008 Olympic Games. “It’s not just a sport, but a way of life, and we have a unique partnership with our horses where big decisions have to be made, communicated and executed in a heartbeat. Trust, courage and precision is what our sport is all about, as well as building on joint strengths, and forgiving and compensating for each other’s weaknesses. We have a very deep relationships with our horses, and it has been fascinating to discuss this with the IOC President today.”

“Brazil is one of the most culturally diverse countries in the world and, just like the equestrian community, the Brazilian people are vibrant and welcoming”, said Pedro Veniss, who was part of the Brazilian Jumping team at the 2008 Olympic Games. “Our melting pot of cultures in Brazil and in our sport is very exciting. As a Brazilian equestrian athlete, I am so proud that we are staging the first Games in South America and I can’t wait to be a part of it.”

“The Rio 2016 Olympic Games is now just around the corner, and it has been a huge pleasure for us all at FEI HQ and our equestrian ‘family’ to have IOC President Thomas Bach with us today,” FEI President Ingmar De Vos said. “We are looking forward to seeing our top athletes, both human and equine, displaying their unique talents to all those who are lucky enough to get to Rio and see the action in person, as well as all those watching from home. The Games will be incredible.”