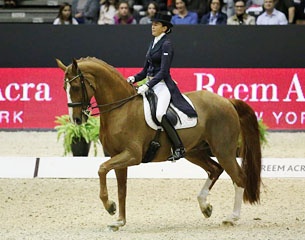 Riding the crest of the wave that saw them take Freestyle bronze at the 2015 European Championships in Aachen, Germany two months ago, Spain’s Beatriz Ferrer-Salat and Delgado registered a convincing victory at the second leg of the World Cup Dressage 2015/2016 Western European League at Lyon, France on Friday afternoon 30 October 2015.

They sent a warning shot across the bows of their rivals when topping yesterday’s Grand Prix with a personal-best mark of 79.250, and for the kur all five members of the Ground Jury were in complete agreement when awarding them the winning Freestyle score of 82.875.

However the spectators held their breath after a spectacular performance from Patrik Kittel who was last to go in today’s thrilling contest. If there had been extra marks on offer for pure excitement, then the Swedish rider would definitely have had it in the bag because, with the willing assistance of his lovely mare Deja, he threw down a test that was nothing short of funky. The crowd couldn’t resist moving to the sound of his Stevie Wonder-themed musical score, but his final mark of 81.175 left him in second spot ahead of Germany’s Fabienne Lutkemeier and D’Agostino in third. Switzerland’s Marcel Krinke Susmelj lined up fourth with Smeyers Molberg, Ireland’s Judy Reynolds finished fifth with Vancouver K and the sole French representative, Pierre Volla, claimed sixth spot with his young mare Badinda Altena.

There was a high standard throughout the entire competition today. As Judge at C, Isabelle Judet from France, commented afterwards, “on paper you had one group at the very top who were clearly at a high level, but even the performances of those in the second group were of a very good standard - it was a great competition to judge”, she said. The Ground Jury, which also included The Netherlands’ Ghislain Fouarge, Belgium’s Jacques van Daele, Luxembourg’s Christof Umbach and Germany’s Katrina Wuest, had the 72.125 earned by Denmark’s Rikke Svane and the eye-catching black stallion Finckenstein TSF as their leading score at the halfway stage.

However, much to the delight of the home crowd, Pierre Volla and his charming chestnut mare, one of three hugely promising nine-year-olds competing in today’s class, bounced well into the lead with a mark of 74.150 when first into the arena after the break. But Krinke Susmelj raised the target all the way up to 78 percent when Smeyers Molberg got into the swing, and Reynolds and Vancouver K slotted in behind the Swiss pair on a mark of 77.425 for temporary runner-up spot when next into the ring. It might not have been the winning score today, but there were big smiles all round in the Irish camp, as this is a new Irish Freestyle record, Reynolds also setting the previous one at Hagen, Germany in April.

With three left to go, Germany’s Fabienne Lutkemeier and D’Agostino raised the bar even higher, the big chestnut’s powerful and expressive movement complemented by great lightness as they marched out in front for a mark of 79.850. But the team gold medallists from the Alltech  World Equestrian Games 2014 in Normandy (FRA) and the European Championships 2013 in Herning, Denmark, were immediately relegated by the foot-perfect performance from Ferrer-Salat and Delgado.

This pair are a picture of symmetry, and as they easily worked through their floorplan in complete harmony with their music, it was clear a new lead would be established. Putting 82.875 on the board, it was now up to Kittel to dethrone the Spanish partnership when last to go. And the crowd watched with amazement as he gave it his very best shot, his 11-year-old mare, Deja, seemingly dancing with delight as the excitement built to a crescendo. The arena erupted when they drew to a halt, but the scoreboard showed 81.175 for second place. However Kittel now stands at the top of the Western European League leaderboard at this early stage of the series when adding today’s 17 points to the maximum 20 he picked up when winning the Central European League qualifier at Kaposvar in Hungary two weeks ago.

“This was only our first competition since the Europeans, so I’m very happy!” said winning rider Ferrer-Salat tonight. It has been quite a year for the 49-year-old who, during her highly-successful career with her former ride, Beauvalais, finished third at the  World Cup Dressage Final in s’Hertogenbosch (NED) in 2002, claimed individual silver at the FEI World Equestrian Games on home turf in Jerez (ESP), and won individual bronze at the 2004 Olympic Games in Athens (GRE).

Her partnership with Delgado has been beset by injury problems for the horse over the last eight years, but somehow she kept faith with to the 14-year-old gelding and that faith has being repaid handsomely over the last nine months. The pair re-emerged onto the international stage in March and had just two competitions under their belt before taking that bronze medal in Aachen in August where she also helped her country qualify for the Rio 2016 Olympic Games. Together they present a beautifully balanced, forward-going picture. She said this evening, “with him it is always very harmonious, there is an understanding between us, I know how he is feeling and he knows me very well also.” Asked to compare Delgado to Beauvalais she said, “Delgado is better in piaffe, but they are both special because they give me everything they can. What they have in common is that they are both very good in their heads and they have big hearts, always wanting to go forward, always wanting to be with me and that’s a very wonderful feeling for any rider”, she said. Ferrer-Salat plans to compete at the next leg of the Reem Acra series in Stuttgart, Germany in three weeks’ time.

Kittel meanwhile recognised that this had been an afternoon of great sport, and complimented the Lyon organisers on opening the doors to the public free-of-charge this afternoon. “The more of the general public we have in the audience the better if we want our sport to progress. The crowd were great, they really enjoyed the competition and supported us all, and the horses were fine in the prize-giving even though the spectators were really noisy. It was a lot of fun!” he said.