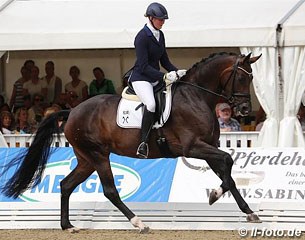 Bred and previously owned by Walter Droege, Florina made her first claim to fame by winning the 2013 German Elite Mare championship.

Under Claudia Ruscher the dark bay mare came back into the spotlight this year. She won the Bundeschampionate qualifier in Wipperfurth and obtained a spot on the German team for the 2015 World Young Horse Championships in Verden, Germany.

At the World Championships Florina finished 18th in the preliminary round with 8.52, but then won the consolation round with 9.06.  In the Finals she finished fourth with an 8.82 total. One month later the mare also placed fourth at the 2015 Bundeschampionate in Warendorf, Germany.

Florina has now moved into Danish ownership and has relocated to Helgstrand's yard in Vodskov, Denmark.