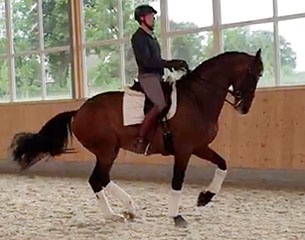 Rock Star is a 7-year old bay Westfalian gelding bred by Markus Kohllpeppel and owned by Henri Ruoste before getting sold to Kasprzak. He is by Rockwell out of Weljana (by Weinberg x Artwig x Fruhlingsrausch).

Rock Star has been in training with Finnish Grand Prix rider Henri Ruoste in Germany for the past two years. He has prepared the talented horse for Grand Prix level. Rock Star is schooling the upper level movements and shows much promise for the big tour.