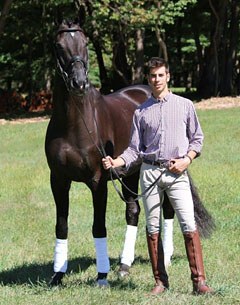 Parra was quick to give credit and accolades to his Piaffe Performance team for their success, and is already looking forward to his team’s next competition. Next up will be a personal favorite of Parra’s— the Dressage at Devon show on September 29- October 4 in Devon, Pennsylvania.

At the NEDA Fall Festival, Parra was exceedingly proud of student Rodrigo Encinas Fuentes, who is originally from Madrid and showed KWPN gelding GK Van the Man (by Obelisk x Landjoker) for the first time in the U25 (under 25 Grand Prix) test. “Van and Rodrigo started to work together only in the last 10 days. It made me so proud to see horse and rider already working so well together at NEDA. Van is really enjoying his job, and Rodrigo is learning a lot, so it is a fun project to be a part of,” Parra reflected.

“I am very grateful to Kamel and Nicoletta Ghribi of GK Horses for helping make it possible for Rodrigo to show Van,” said Parra, referencing his exciting new sponsorship. “What a fantastic feeling it is to be able to help in making others dreams come true! I personally am also so proud of Van, who has been my partner since 2012. To see him so mature and happy in his job is also a super feeling.”

Katie Riley, who is a founding member of the Piaffe Performance team, thanked Parra and the owners of Toy Story, Heather and Gurdon W. Hornor, for the opportunity to ride the 2006 bay Dutch Warmblood gelding at NEDA in his CDI debut. The pair finished third in the Prix St. George with a 69.3 percent, and second in the Intermediate I with a score of 68.860. “I could not be more proud of him, finishing right on the heels of the winners. I’m loving the journey on this special boy and so very grateful,” Riley said. 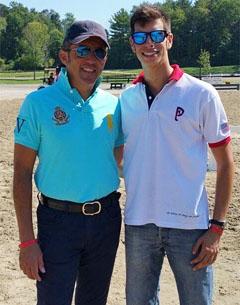 Parra expressed his excitement of the pairing of Riley, who is a USDF Gold medalist, and Toy Story (Trento B x Vroukje, by Jazz). “They have come so far in just one year together and are looking great,” said Parra. “It was Toy’s first time doing that test, and while they had really good scores, and they have a lot of potential to do even better in the future. They will be exciting to watch at Devon.

Riley and Toy Story will compete in the same classes at Dressage at Devon. Riley will also compete in Devon’s Dixon Oval with Don Cesar (Desperados x Manhattan), who is owned by Parra and his wife Marcela Ortiz Parra, in the FEI Five-Year-Old division. Riley hopes to add a first place to the Westphalian gelding’s third place ribbons from the 2015 Markel/USEF Young Horse Dressage Championships

At NEDA, Parra wasn’t only on hand to help his students. He also competed with Blickpunkt, a German-bred Westphalian gelding (Belissimo M x Fidermark). “He is a super horse from our partners at Cavallias and Villa Do Retiro horses,” said Parra. “Blickpunkt has been training well since Florida, and it was important to me to get him back in the ring before Devon.” They competed in the small tour FEI Intermediate I CDI and Prix St. Georges as a warm-up for Devon.

In addition to Blickpunkt, Parra will be showing Fashion Designer OLD at Devon in the USEF Fourth Level classes at Devon. The 16.2-hand bay Oldenburg (by Faustinus x De Niro) recently placed third in the FEI Developing Horse Prix St. Georges at the 2015 U.S. Developing Horse Championships. He will be a returning competitor at Devon.

Parra and his team have been hard at work getting ready for Dressage at Devon. “We always like to do our best to shine at Devon,” said Parra. “It is a very special show to us. It’s close enough to home that a lot of our friends and students come to watch and support us. Our preparations revolve around, of course, the details of the test, but also just as important is that the horses are relaxed in their work. I get them outside even more than normal, walking in the woods and on the hills, and even down the roads. I think the more they see the less likely they are to get overwhelmed by the show atmosphere.”