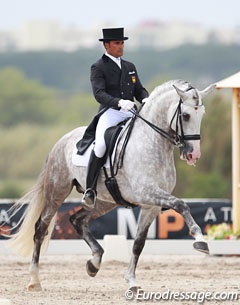 Spanish team rider Jose Antonio Garcia Mena has lost the ride on his most talented, upcoming FEI horse Dragao Figueiras. The 7-year old Lusitano has returned to his owner in Portugal, Herdade Figueiras.

Garcia Mena and Dragao Figueiras (by Unico out of Valeria) were a highly successful duo in the young horses classes and the pair made its international small tour debut this year. Mena failed to reach an agreement with the owner which would guarantee him the long-term ride on Dragao on the road to Grand Prix.

One year ago Jose Antonio lost the ride on Batuta, which he trained and competed up to Grand Prix level. The duo was one of the shooting stars on the international Grand Prix scene, but their partnership was abruptly ended when the owner sold the mare to a Portuguese buyer who gave the ride to Gonçalo Carvalho.

Mena began competing the grey stallion Dragao as a 5-year old at the Sunshine Tour in 2013. They won classes in Vejer de la Frontera, Toledo and Madrid. In 2014 they moved to the 6-year old division and only showed at the CDI Barcelona. They also won the Spanish Young Horse Championships. The duo made a winning Prix St Georges debut at the CDI Jerez de la Frontera in February 2015 and continued with victories at the CDI Vilamoura and Mallorca.

Garcia Mena is currently training and showing the 6-year old Hanoverian Belconi (by Belissimo M) and the 9-year old Sir Schiwago (by Sir Donnerhall x Lanciano) for Russian owner Irina Zakhrabekova, who bought the latter horse from Ingrid Klimke. This year Mena also competed the 6-year old Ules VDOS and the 11-year old Rialto Star (by Royal Diamond). The now 7-year old chestnut Doctor de Encinasola, with whom he contested the 2014 World Young Horse Championships in Verden, has not been out the entire 2015 show season.