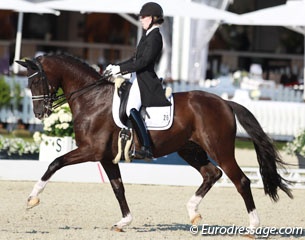 The combinations which have qualified for compete at the 2015 Piaff Forderpreis Finals for German Under 25 riders are known. The final qualifier took place at the CDI Donaueschingen on 18 - 20 September and eight riders have now qualified to compete in Stuttgart.

The Piaff Forderpreis is a special show circuit for German Under 25 riders for which riders have to initially qualfy via a national training session and competition event held in Warendorf in February. Through the outdoor show season these qualified riders can obtain points at four events. The eight highest ranked riders are eligible to compete at the annual Piaff Forderpreis Finals held at the CDI Stuttgart in November.

This year's finalists are

Last year's winner of the Piaff Forderpreis, Charlott Marie Schurmann on Burlington, has now made a successful transition to the senior circuit