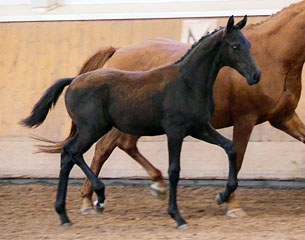 The champion foal by Concreto out of Limbola des Fontaines (by Jalienny x - Ramiro Z) impressed the judges with his movements.

“This foal had a great type, but especially his movements were amazing. He could trot around and round and he never lost the rhythm. He moved very beautifully, going uphill and was very powerful," said Dr. Evelyn Schlotmann of the Oldenburg Verband, who served on the judges' panel. This bay colt is bred and owned by Sirpa Tapper.

The Hanoverian bred colt Fürstentanz Carrus (by Fürstenball x Wolkentanz I) was named reserve champion. This black colt with modern type is bred by Carrus Dressage and owned by Kaisa Niiranen.

The Finnish Warmblood filly Only the Finest (by Finest x Don Schufro) finished in third place. This filly with great movements is bred and owned by Sanna Havanko.

A total of 22 jumping foals and 48 dressage foals participated in the 2015 European Breeding Event Finland. The judges from the Hanoverian and Oldenburg society and the Finnish Horse Breeding Association were very satisfied with the quality of the foals. The average quality of the foals is getting higher and judges wanted to congratulate the Finnish breeders for the good work they have done.

The European Breeding Event Finland show, shortly EBEF Show, is a sales and judging event for riding horses. The event has been organised by the Finnish Horse Breeding Association, the Finnish Hanoverian Society, Ypäjä Equine College and the Finnish Breeders Association since 2010.