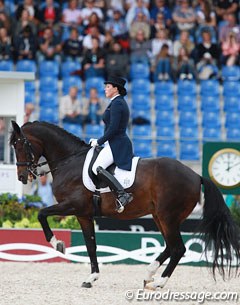 Russian Inessa Merkulova stands in the lead of the FEI Olympic Ranking List of which the latest version was released on 8 September 2015. Twenty slots out of a designated 60 will be open to individual riders for the 2016 Olympic Games.

Forty slots are open to the teams and twenty are allocated to individual riders. For the Olympic Ranking List the four best results count over the period of 9 March 2015 to 6 march 2016. If one nation is able to qualify a minimum of three and a maximum of four riders through the Olympic ranking list, they can create a "composite team".

Two individual riders from Canada and Mexico have also qualified through the Pan Ams, so 18 slots remain. The allocation is determined according to three criteria:

The final six individual quota places will be allocated to the athletes of nations from the ranking list next March.

Inessa Merkulova and the Russian bred Mister X (by Egeus) are currently in the lead with 1100 points, followed by Danish Anna Kasprzak on Donnperignon (1083). After years of being a top nation, Denmark was unable to qualify a team at the 2015 European Championships. It will try to achieve a composite team with Daniel Bachmann now ranked 5th (940 points) and Mikala Gundersen 6th (934 points).

Other top 10 ranked combinations at the moment are Austrian Victoria Max-Theurer, Swiss Marcela Krinke-Susmelj, Irish Judy Reynolds, and Belgian Fanny Verliefden. Norwegian Trude Hestengen is in the top 10 but she recently sold her horse.