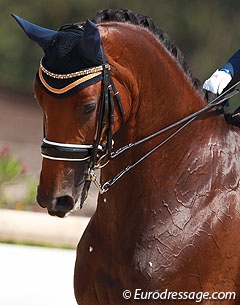 This show season Equestricons Walkure (by Romanov x Donnerschwee) swept every single class she competed in at the 2015 CDI Wellington in Florida in March. She also won the Dutch KNHS MDH-Kostendrukkers Young Riders Cup in Etten-Leur, The Netherlands, before heading to the 2015 European Young Riders Championships, where she won the team test with a world record score of 76.500% as well individual test gold  with 77.447% and kur silver with 81.225%.

The elegant bay mare, who has talent for piaffe and passage, is ready to make the transition to Grand Prix level. The past eight weeks Swedish Grand Prix rider Anna Blomgren has confirmed the GP movements on the horse and owner Jochen Arl now sold Walkure to Agnete Kirk Thinggaard.

The 32-year old Kirk Thinggaard, who has her own private dressage stable on the Julianelyst estate in Ostbirk, Denmark, is a Danish A-team dressage rider. Aboard the 12-year old Jojo AZ (by Ginus x Justboy), Agnete won silver at the 2015 Danish Dressage Championships and placed 11th at the 2015 World Cup Finals in Las Vegas.