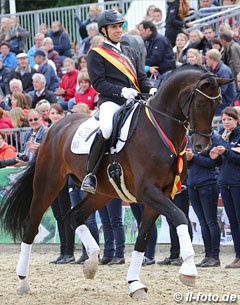 Manuel Bammel and Hof Rosenthal's Hanoverian gelding Smirnoff climbed the ladder from the third highest score in the preliminary round to victory and the national title in the 5-year old dressage horse division at the 2015 Bundeschampionate in Warendorf, Germany, on Sunday 6 September 2015.

Bammel and Smirnoff (by Sir Donnerhall I x Florencio) were second in group 1 in the preliminary round but at the sold-out finals on Sunday they topped the leader board with an 8.8 total score. The gelding got 8.5 for walk and trot and 9 for canter, submission and general impression.

The long legged, elastic Hanoverian impressed with the swing over the back. Bammel, who had hoped for a good placing but never even thought of winning, was an assistant trainer at Jonny Hilberath's for seven years before becoming a trainer at Hof Rosenthal. Smirnoff was gelded in December 2014. 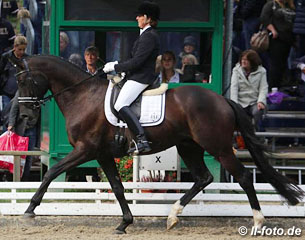 Birgit Hild and Ingo Wittlich's Trakehner gelding Goldmond (by Imperio x Latimer) became the silver medallists. The dark bay, noble looking gelding scored the highest mark of the day for walk, 9.5. He got 8 for trot, 8.5 for canter, 9 for submission and 8.5 for general impression to average 8.7 for second place. Rider Hild burst out into tears when she heard her scores and live commentary from the judges' box. "A happy, well ridden horse. That's what we want to see," said the judges.

Katrin Burger and the Baden Wurttemberger branded stallion Sir Solitär (by Sir Sandro x Disco Tanzer) slotted in third and got the bronze medal. The dark bay stallion, which is owned by Burger's employer Lothar Merkt, totalled 8.5. with 8 for walk, 8.5 for trot and canter, 9 for submission and 8.5 for general impression. The judges praised the pair for riding outstanding transitions. 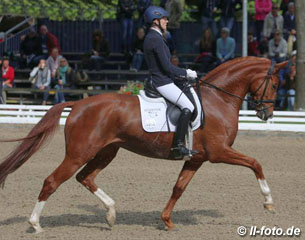 The winner of the preliminary round, Hanoverian mare Bellena (by Belissimo M x Welser) could not grab a podium place on Sunday and finished fourth with 8.4. Under Esther Maruhn, Felix Ferdinand Becker's chestnut mare, was not entirely through in the Finals and got 8 for submission. Her gaits were scored with 9 for trot, 8 for walk, 8.5 for canter and 8.5 for general impression.  Bellena tied in fourth place with Claudia Ruscher on Walter Droege's home bred Hanoverian mare Florina (by Furst Romancier x Donnerhall).