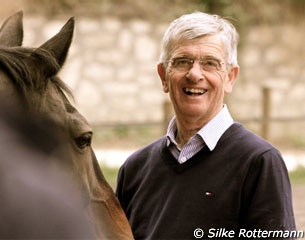 Returning guest columnist this week is Colonel Christian Carde, who has looked upon international dressage for more than 50 years as international competitor, French national coach and I-judge. The former chief rider of the Cadre Noir expresses his opinion on the judging at the 2015 European Championships in Aachen.

As a competitor, much later as national dressage coach of my country, I had had the pleasure and honour to take part at the CDIO in Aachen. It had been the most beautiful dressage show organised in Europe. There the best riders and judges in the world met. The best comradeship between the competitors dominated. The judges there were respected. The audience was enthusiastic. This show paid honour to the country which organised it and contributed magnificiently to the promotion of dressage.

This year, during the European championships, the audience hissed the judges! It booed after the freestyle  scores of Charlotte Dujardin had been announced. And during the prize-giving when the speaker thanked the judges.  This is serious.

When the judges' panel is blamed this happens when one suspects incompetence or partiality which is a form of cheating. But this can be explained and we should know the reasons. Here they are:

Like stipulated in article 419 of the FEI dressage rules the international competitions are aimed to preserve equestrian art. But it doesn't play this role anymore, for which it once was created.

International competition has become a big business which generates considerable amounts of money. It has become a profession in which many do a career. The horse is the means in it, if not the victim. The transmission of equestrian art is no longer the reason for competitions' existence.

For already several years the riders who are passionate about preserving classical principles in competitions have stressed the deviations which marred the competitions at the highest level. They are joined by veterinarians, scientifically orientated groups like ISES and animal welfare organizations. The FEI did not want to listen to them all. Thus the grumbling which doesn't cease, in contrary, the so-called rollkur resulted in a poor compromise. And at Aachen this year one of the best positioned riders of the world rankings warmed-up his horse for a long time in this very constraining, so challenging position. On the same evening a new petition against the rollkur was launched on the social networks. It achieved more than 10 000 signatures in less than 48 hours. A disapproval of the FEI.

And that said, exactly the same rider was eliminated later on when he horse bled in the mouth! Another of the most successful had to retire because his horse put the tongue over the bit and reared in the piaffe.

And it is not so long ago, at another international championships at Aachen, that the horse which had dominated the classes there bolted in front of thousands of spectators. Next day the rider had to borrow a horse for the prize-giving, in a competition called...dressage! But overall, since years, the quality of horses improves to an extent which the quality of equitation doesn't follow. Just like the equestrian practice progressively remotes from the correct equitation which still can be found in the FEI regulations.

These are the tangible signs of the deviations from a beautiful and good equitation. But also the little harmonious attitudes of the mechanised horses with painfully closed mouths thanks to cranked nosebands, exaggeratedly overbent through very strongly pulled reins. This has nothing to do with the light and elastic contact which it should be and which is required in the articles 401, 416 and 417 of the rulebook. And as long as there is such a big gap between the rules and which is shown, but also between the placings by the judges which it is the case at the moment, one doesn't need to wonder that the judging poses serious problemens. The FEI has well raised the number of judges from 5 to 7 at the championships and added three judges of the JSP, but it doesn't improve the situation. Does it need 15 judges around the arena to make the judgement more convincing? Without a doubt not.

It is time to think back to the fundamentals of equestrian art when it comes to training and presenting horses. They are perfectly expressed in the FEI dressage rulebook, in particular in article 401. It is sufficient to recognise, understand and applicate them. But it is also necessary to revise profoundly the question of judging. Considering its more scientific modification, less subjective, based on the recent rulebook and the results of research. The considerable opportunities now offered by image processing on the computer will contribute greatly.

Even though we could also see good work being appropriately rewarded, Aachen was a serious warning which is not allowed to be neglected. It is praiseworthy that judges reward correct work, but to put dressage on the right path again they have to stop rewarding wrong work at the same time.