Silke Rottermann: Dressage at the 2015 Europeans, Nothing New Under the Sun 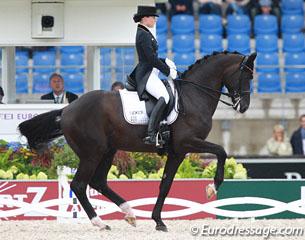 The 2015 European Championships at Aachen somehow reminded me of the professional life of a teacher: a teacher can have the nicest  class with lovely kids, but as soon as a few rascals are in there they leave their stamp.  For many people Aachen 2015 seemed to be something similar.

Looking at the press coverage from Aachen, one could easily get the impression that the good performances were thrown overboard with comeback kid Totilas making negative headlines for different reasons. It cast a dark cloud over the Europeans and dressage, which lives in the shadow of Germany's mainstream news coverage, got headlines outside the equestrian press.

The FEI's famous "Code of Conduct" introduction ("The FEI requires all those involved in international equestrian sport [...] to acknowledge and accept that at all times the welfare of the Horse must be paramount") was again in jeopardy regarding with some horses. Everybody considers visibly cranked nosebands, roughly pulling hands, digging spurs and a visibly blue tongue hanging out of the mouth — all witnessed during the Aachen days-- as elements attacking an animal's well-being. Furthermore collection "isn't achieved by the shortening of the pace through a restricting action of the hand" (as stated in paragraph 417 until a few years ago). The massive shockwave on social media is just crying wolf as horses not fulfill the demands of the FEI rules are a problem as old as the sport itself. There was nothing new about the upheaval at Aachen due to lame horses, bleeding mouths, blue tongues and poor, rough riding. 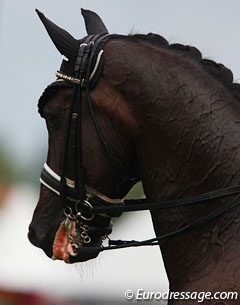 For decades only a handful of horses were able to show the required movements properly but it was probably easier to separate the apples from the oranges. In the 1960s the Soviet riders were known for riding their horses which established experts already back then already called "mechanical". Still they had a very mastery way of performing the required movements. At the time, the "German" versus the "Russian" school caused heated discussions and controversy for years and that was forty years ago.

Aachen was a renewed taste of what then already became an obvious problem for the future of dressage: high marks for well trained and mechanised looking horses. Also then a free and supple extended trot with the hind-legs truly covering ground and thereby living up to the FEI rules got the same mark as a horse marching with the non-existing elasticity of a sewing machine. As long as it looked breathtaking it scored high marks. The same became painfully obvious for the piaffe: correct piaffes scored the same marks as the extravagant ones which appeared diligent and active but lacked clear rhythm.

Still, the 2015 Europeans in Aachen should not only be remembered for the negative sides of the sport which unfolded there, as some press outlets and countless Facebook "keyboard crusadors" suggest. By mainly focusing on the dark side,  injustice is being done to all those riders who in fact displayed the essence of dressage: harmony and grace between horse and rider as well as beauty and an aspect of the "spectacular" (which is a rather disturbing attribute that unfortunately crept into the sport the last decade) of horses trained on the basis of classical principles. Aachen 2015 was an excellent showcase for them. There were horses that delighted the crowds in Aachen. Moreover, some of them received a medal for their good work. Albeit, the judges have to ensure that international dressage rewards harmonious partnerships. Their decisions guide the way. For instance, Kristina Sprehe and her Hanoverian Desperados were one of those. Their harmony in particular in the freestyle was something rarely to be seen to that degree. The breeding stallion's submission was oustanding and impressively demonstrated by walk-piaffe-walk-transitions. Another example is the highly refined and so natural looking movements of comeback kid Delgado under Beatriz Ferrer-Salat. This horse literally flowed with great ease through the most difficult if movements. He was beautifully up in the bridle and expressive in the way a true "happy athlete" needs to look. Not (yet?) in the medals, but already a pair to watch out for their harmony and lightness was France's upcoming combination Karen Tebar and her young gelding Don Louis, a lightfooted mover presenting himself in exemplary self-carriage and silhouette. 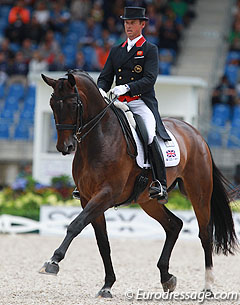 For those who claim that Aachen once again proved that high performance dressage has become a kind of parade of extravagant gaits instead of a contest of the quality of training, the best counter-proof is the huge brown gelding Nip Tuck, ridden by British team silver medalist Carl Hester. The Dutch warmblood is a superb example that even in our days honest training can bring a horse, neither expensive as a youngster nor born as a high-flyer, into top ten of Europe. Hester demonstrated what was once considered the natural aim of dressage: improve the gaits by perfecting the natural balance; something which seems to increasingly fall behind with the breath-taking improvement of breeding. When this is neglected in a horse's training it will reveal itself mercilessly in the high school movements.

As much as the uproar about what happened in Aachen is understandable, the exaggerated and excessive media blast also ensured that the  praise and attention for the correctly schooled and presented horses were diminished. Aachen saw some inspiring partnerships, who will help to safekeep the horse-friendly image of dressage inside the competition arena. They do not deserve to get lost in the shuffle of media attention because of these unfortunate happenings in Aachen that did the sport a disservice.

"Only bad news is good news," is an old journalistic proverb. Unfortunately it is also one more nail in a discipline's coffin. The good news needs the upper hand, which Aachen deserves.