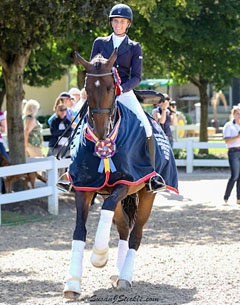 In each division, 60% percent of today’s score was added to the 40% earned in the preliminary test to determine the overall champion.

After taking the lead following Thursday’s Prix St. Georges Test with a score of 72.895%, Heather Blitz (Medfield, Mass.) and Oak Hill Ranch LLC’s Danish Warmblood, Ripline (by Hotline) were poised to win it all. However, Thursday’s second-place finisher Christina Vinios (Wellington, Fla.) and her own Oldenburg, Folkestone (by Fidertanz) came from behind to win the Developing Horse Prix St. Georges Championship with an overall score of 71.248%. Vinios took today’s ride up a notch from the preliminary test and had a seemingly flawless final test highlighted by accuratechanges to score a 72.402%.

“I loved our test. A couple times I may have pushed a little too hard and had a few little bobbles, but I really wanted to fight for every point and show the horse the best that I could,” said Vinios.

Even with a nice canter tour, Blitz and Ripline placed eighth in the final test with a 68.333%.  However, the strength of Thursday’s score gave them an overall score of70.158%. Although they could not match Thursday’s performance, Blitz noticed improvement.

“I liked the pirouettes better today, and the extended walk is always was one of the highlights. In general, he felt relaxed and I was super happy with him. Just to think a horse his age can be second in the country, I couldn’t be happier,” said Blitz.

Finishing fifth on Thursday with a score of 67.942%, Cesar Parra (White House Station, N.J.) and his and Martin Sosnof’s Fashion Designer OLD (by Faustinus) connected in the final test for a score of 71.422%. That was good enough to propel them into third place for a overall score of 70.030%. Fashion Designer OLD exhibited a superb level of enagment, which was missing in the preliminary test, and executed graceful pirouettes and a great trot tour. 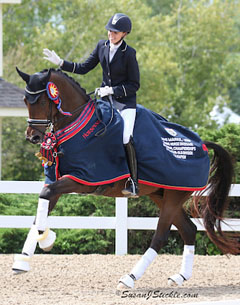 British transplant Carly Taylor-Smith (Malibu, Calif.) and Nikki Taylor-Smith’s Oldenburg, Rosalut NHF (by Rosenthal x Salut), continued to impress the judges receiving a score of 8.380 in today’s final test. This sealed the division for them as they topped the 16-combination field with an overall score of 8.460. Additionally, it gave them their second consecutive U.S. Young Horse Championship title  as they won the 2014 4-Year-Old Championship last year. Rosalut NHF displayed outstanding submission, and the judges awarded it nicely with a 9.0. They followed this with an excellent 8.4 canter score. Although the canter wasn’t as big as the judges would have liked, they were pleased with Rosalut NHF’s collection, which is advanced for his age.

“The ride was great today; the horse was definitely on today. We fit like a glove, and we just have so much trust that the test just flowed. There wasn’t anything that was particularly tricky. He gives me a 100 percent all the time,” said Taylor-Smith

Gail Lynn Redinger (Sandpoint, Idaho) and her own KWPN Formancier (by Furst Romancier x Don Romantic) barely edged out Katie Riley (White House Station, N.J.) and Cesar Parra’s Westphalian, Don Cesar (by Desperados) to take Reserve Champion with a combined score of 7.960. Redinger and Formancier’s consistency came through for them as they again earned high scores in the walk and canter. He also was  supple, which was missing in Thursday’s test.

“I’m thrilled. I was hoping I could improve from Thursday and show him off a bit more. He came up to my expectations. He’s so reliable, and if I ask correctly, he’s always there for me,” said Redinger.

Although Riley and Don Cesar had a great test, their walk score was a little weaker than Redinger’s, scoring an 8.0. However, they outscored Redinger in the trot with a score of 8.0 due to their natural cadence and earned an overall score of 7.888. 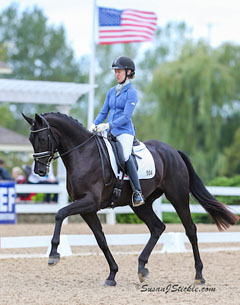 Alice Tarjan (Frenchtown, N.J.) and her own Danish Warmblood Tiko (by Temptation x Akinos)  capitalized on Thursday’s preliminary test performance. They put in a strong final test to take the 4-Year-Old Championship with an overall score of 8.064. The judges, again, were impressed with the canter work and awarded them highly with a 9.0. Tiko showed natural cadence and softness to improve upon Thursday’s trot score for an 8.5.

“Tiko was really good; I was really pleased. She put in a pretty decent test and showed what she can do at home, so that’s all I can ask for,” said Tarjan.

What looked like a one-two sweep for Tarjan, judging by the preliminary tests, turned into an upset when Brooke Voldbaeck (Sherwood, Ore.) and Sonnenberg Farm's Generosa S (by Uphill x Farrington) scored an impressive 7.792 to leap from fourth place to become Reserve Champion, bumping Tarjan and her own Oldenburg, Donatella M (by Furstenball x Jazz Time), to third place. Voldbaeck came to these championships as an alternate and has been riding Generosa S for six months, so she cannot be more pleased with today’s results.

“I was really happy with her overall consistency. She was the most with me today. I was better on my eights. I felt like I rode the test better and was more prepared. Today, I rode more focused, and I think that helped improve our score. She was a little tired, and the lengthenings weren’t as good as Thursday, but I think the rest of the ride was better,” said Voldbaeck.

Tarjan and Donatella M could have completed the sweep if it were not for a riding error. After coming out of a nice warm-up, Tarjan rode Donatella M a little rounder than she liked, likely contributing to a lower score. However, she performed the test with a lot of style and demonstrated beautiful elasticity in the trot.