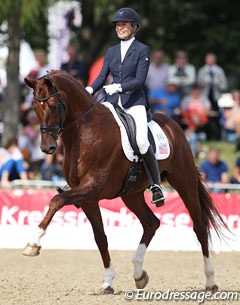 Vitalis is an 8-year old stallion by Vivaldi out of Tolivia (by D-Day). He is bred by Toon de Crom and W. Verbakel and was originally named Capriool. Owned by Willeke Bos and Eugene Reesink, Vitalis was presented for licensing at the 2009 Westfalian stallion Licensing in Munster, Germany, and became the reserve champion.

Reesink and Bos leased the chestnut stallion to the Westfalian state stud in Warendorf, where he bred for three years. The stallion produced amazing offspring that has been highly wanted at auctions and successful in the young horse classes in Germany. Vitalis was presented for licensing to the KWPN society in Holland but they rejected him.

Under Marieke van der Putten Vitalis competed at the 2012 World Young Horse Championships in Verden, where he finished sixth in the consolation finals. He also ranked fifth in the 2012 Pavo Cup Finals. He sold to Charlotte Jorst in September 2012.

Jorst spent 2015 in Wellington, Florida and Europe, but Vitalis was never competed this year. His last show was the Festival of Champions in Gladstone in June 2014.

"Vitalis is such a great breeding stallion," said Jorst. "I feel he should be given the best opportunity to contribute to the next generation of sport horses, and I know he will have that with Paul and Lone. His life is going full circle, back to Europe where he was born!"