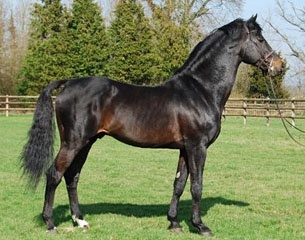 Loutano was bred by Marlis Jürgens and owned by the Holsteiner verband. He was by Landgraf I out of Troja (by Calypso I x Landgraf I x Manitu xx).

He became the reserve champion of the 1990 Holsteiner Stallion Licensing and completed his 100-day Stallion Performance Testing in Adelheidsdorf in 1991. He scored 134.79 points for dressage and 122.31 points for show jumping to finish third out of 72 stallions with a total index of 136.63 points.

The dark bay Loutano began his sport career under Frauke Stuve and finished third at the 1991 Bundeschampionate, which were then held in Munich. In 1994 Wolfgang Schade took over the ride and competed him at L-level. In 1995 German based French Olympian Margit Otto-Crepin took over the training of the stallion and competed him first at small tour level. He made the transition to Grand Prix level in December 1998 and was shown only shown at international Grand Prix level for one year. He competed at the CDI's in Frankfurt, Neumunster, 's Hertogenbosch, and Dortmund. The latter show was his last in April 1999.

After his sports career, Loutano returned to Holstein where he stood up for stud. He has 219 offspring registered for sport in Germany and 10 have reached S-level in dressage, 8 were shown at S-level in show jumping. Twelve of his daughters became State premium mares and he sired 11 licensed sons, of which Lorentin I is the most famous one.

In 2002 Loutano moved to France, where he stood up for stud until his passing.