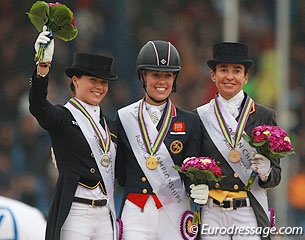 Charlotte Dujardin and Valegro have retained their European Champions' title after winning kur to music gold at the concluding day of the 2015 European Dressage Championships in Aachen, Germany, on Sunday afternoon 16 August 2015. Their freestyle was probably one of their least sparkling ever produced and in the lion's den it was hard to keep German favourite and silver medal winning Kristina Bröring-Sprehe at bay. Fortunately the day was brightened by well earned bronze for Beatriz Ferrer-Salat on Delgado.

The Kur to Music Finals were a bit lacklasture at the start. The class began with two top pairs scratching last minute: Fiona Bigwood's Orthilia was withdrawn for having a sore back and a rash and Anna Kasprzak felt not fit enough to ride to Kur after accidentally being kicked in the chest by Donnperignon on Tuesday. Because these withdrawals were so late, the two spots could no longer be filled by the next two highest placed Grand Prix Special riders. Therefore, the class began 10 minutes late and there were unnecessarily long breaks, killing the gradual build-up and excitement for the finals. Also the weather was a party-pooper with a dark grey sky, a constant drizzle or rain and cold temperatures spoiling the festivities.

As last rider to go Charlotte Dujardin was well aware of how the cards were dealt and in what point-mood the judges were. On home turf Kristina Bröring-Sprehe had received a mighty 88.804% for a fault-free test and she figuratively blew the roof off the stadium, which was filled to a capacity of 38,000 -- two thousand short of sold out. While Dujardin is known to ride 90% + freestyles, the premiss today was certainly to stay fault-free for her to secure gold. 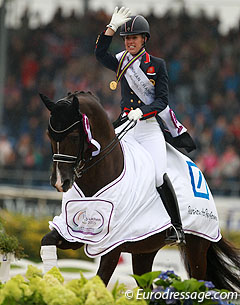 While Valegro still confirmed himself as the world's number one this week, the 13-year old Dutch warmblood gelding did appear a bit less sharp and pulled more on the bit in the Grand Prix and Special than usual. Valegro also showed a tremoring lip for the first time in the show arena here in Aachen and appeared as if he slightly less enjoyed the "circus" this time, although he always looked a happy camper when he left the arena on the long rein or in the prize giving. In Aachen Dujardin made mistakes in both rounds and everyone sat at the edge of their seat to witness if the Brit could get the deal done flawlessly. She didn't and rumours surfaced that the first signs of mileage are beginning to show on this pair which has been unbeatable since 2012.

Valegro (by Negro x Gerschwin) was the least fresh in the freestyle and really pulled more on the bit, making Dujardin work harder to keep him up in the bridle and engaged from behind. Riding her beautiful Tom Hunt freestyle based on the music of How to Train Your Dragon, Charlotte executed big trot extensions but there was a double beat in the passage half pass to the right. The first piaffes were very nice and on the spot but Dujardin's extra control with the hands showed and Valegro side-stepped with the left hind in some piaffes. The collected walk was clear in the 4-beat rhythm but below the vertical, the extended was limited in the ground cover. The canter extensions and pirouettes were outstanding, as well as the huge canter half passes, but there were several mistakes in both one tempi diagonals, but Dujardin rode solid two tempi changes. In the final piaffe pirouette Valegro ran out of steam and struggled to keep the rhythm clockwork. Their kur was not polished to standard, but certainly still more than lovely to watch.

Dujardin scored 89.054% and stayed only a fraction ahead of Sprehe. The crowd booed loudly. Six judges placed Dujardin first on a technical level, only German judge Katrina Wust had her third. For the artistic part three had her first and four judges second. 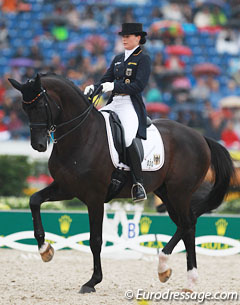 German number one Kristina Bröring-Sprehe and her 14-year old Hanoverian stallion Desperados (by De Niro x Wolkenstein II) produced peak performances in Aachen. The elegant pair has shown dramatic improvement in 2015 being trained by German team coach Monica Theodorescu as the talented black stallion is maturing and finding better balance and self carriage. Sprehe is reaping the fruits of her hard work and with a little home favouritism and the willingness of the judges, she got a very generous 88.804% for a very strong ride.

Desperados produced big trot half passes that were uphill and ground covering extensions. The passage has improved so much in its regularity, which used to be a weak point, and also the piaffe is more closed and balanced, but the horse can still not keep a smooth rhythm and even steps in the very expressive piaffe. He still regularly falls back on the forehand and Sprehe often rides with high hands to keep the horse up in the bridle. The collected walk was slightly tense and the extended walk could have had more overtrack, but in canter the horse was very consistent. He showed amazing double pirouettes, massive canter extensions and very good single tempi changes, but in the two's he swayed to the right. The final piaffe-passage line had a lot of power. Sprehe produced a well earned silver medal ride.

She could easily have gotten bronze in the Grand Prix Special, but Spanish duo Beatriz Ferrer Salat and her Westfalian gelding Delgado (by De Niro x Weltmeyer) had to wait until the freestyle to be recognized and rewarded for beautiful riding and good horsemanship. 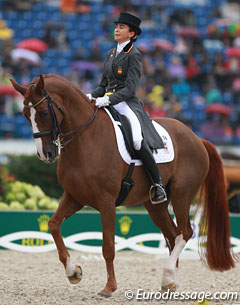 The Barcelona based rider, who trains with Ton de Ridder, rode a freestyle created by a local, young Spanish music arranger with drum tones dominating. Delgado showed amazing regularity in the piaffe and passage. He was a bit rushed in the half pass right. The extended walk was active with two hooves overtrack but there could have been a bit more stretch, the collected walk needed to be a bit more closed. The tempi changes were big and executed on bent lines, but only in the ones did he lose the forward tendency and swayed a bit in the body. One double pirouette to the left required more collection but they were all small. Ferrer-Salat finished her ride on a full piaffe-pirouette that was crystal clear in the rhythm. At all times Delgado was lovely and soft in the bridle and stayed at the vertical.

Delgado returned to the show ring after a three year break. He made a staggering impression in 2012 but dropped out of Olympic contention due to an injury. The horse now looks less muscled than in 2012 but Beatriz revealed that the only way to keep him sound is little dressage work. 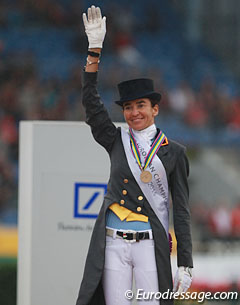 "I have the horse since he was six, he has been injured a lot. So I would go to a show, stop him (due to injury), go to a show, stop him again, but every time he was really good, really good, so I just keep trying. Finally we got it solved, and I started in March in Spain and did a couple of shows in Spain and then my first international outing was at Hagen and then I came here. Our goal was to qualify for the Olympics, which we achieved, finishing fourth and then when I saw I was in the top five I was really surprised, then yesterday I was fourth and today I was third. I got him sound thanks to a chiropractor and a masseur. No medicines, no nothing, just this and that’s the only way until now he has been sound. I had taken this horse to clinics, vets everything but there was no way to get him sound. We did it just naturally, a lot of rehabilitation, very slowly, slowly, slowly and now he’s really, really good. This is a hard week....because it’s a bit hot I have to ride him twice, once in the stadium when it was open, he’s really sound at the moment."

Ferrer-Salat revealed that she only trains Delgado for dressage once or maybe twice in seven days. For the rest of the week she hacks him twice and goes on the race track two days per week.

Isabell Werth's enfant terrible Don Johnson (by Don Frederico x Warkant) has come of age in Aachen this weekend and produced the ride of a lifetime in the freestyle today. For the first time the pieces all came together and the duo had fun in the kur: they were flawless and Isabell Werth rode with a big smile on her face. 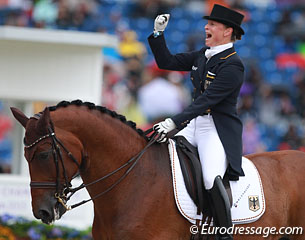 With a large collection of fun and original custom made freestyles at her disposal, it is always interesting to see Werth's choice of the day. Her David Bowie kur is a super nice one and big was the surprise when her very dusty -- played to death -- "Land of Hope and Glory" kur was pulled from the shelf. This freestyle has been used for Apache, Warum Nicht and Satchmo in the early 2000s, and also played nine years ago at the 2006 World Equestrian Games, in Aachen! A fun insertion of Queen's Bohemian Rhapsody could not boost the outdated music, which should be locked away for eternity.

On a technical level Werth was awesome today. Her bay gelding was very obedient and showed nice half passes in trot and passage. The collected walk was a bit constrained, but the canter had scope. One double pirouette right was big, but the canter extension was very uphill. The double pirouette left was slightly laboured. The one tempi changes were strong, and the piaffe fan rhythmical. Werth finished with a one-handed passage half pass. 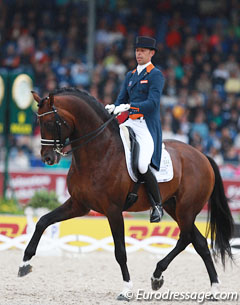 Aboard the Austrian owned Dutch warmblood stallion Johnson (by Jazz x Flemmingh), Minderhoud rode a freestyle with a low degree of technical difficulty. His bay stallion is very expressive, energetic and forward throughout the ride but needs quite a lot of motivation from the rider to get going. The piaffes were rhythmical, yet narrow behind (he almost steps on his own coronet bands) and in the canter half passes the horse dropped behind the vertical, but there was much crossing and ground cover. The walk was the weak point of the test as he hurried in the extension and produced no overtrack. The left canter extension was big, the left double pirouette a big hectic. Johnson is not soft and through in the bridle and shows tongue but because the horse is so much engaged from behind he is still very expressive in his movements with a lot of knee action. The right canter extension was a bit explosive. There was a loss of rhythm in the final piaffe pirouette and the end halt was not square. With a better walk and more fine-tuning around the edges, Minderhoud could have ended back on the podium.

Eurodressage's Astrid Appels was on the scene and took photos of all riders . If you are interested in ordering prints, collages, photo albums or digital images, send us an email with your name at info@eurodressage.com