David Stickland: Who Will Qualify for Rio in Aachen This Week? 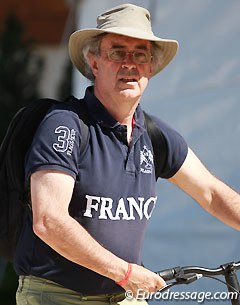 This is the big week for Olympic Dressage qualification in Europe. Three countries will get their team tickets for next year’s Olympics. Following the WEG in 2014 GER, GBR and NED are already qualified (as are USA and AUS).Three more countries will qualify from the European championships, the competition is of course intense. Everyone wants that coveted team qualification.

By examining the historical scores of the team members we can make predictions on the likely team scores this week. We can take account of the likely/possible uncertainties on that prediction and we can see what would happen if the top rider/horse combination for a country for some reason goes badly, gets eliminated or the such-like. That is what we show in the picture below: 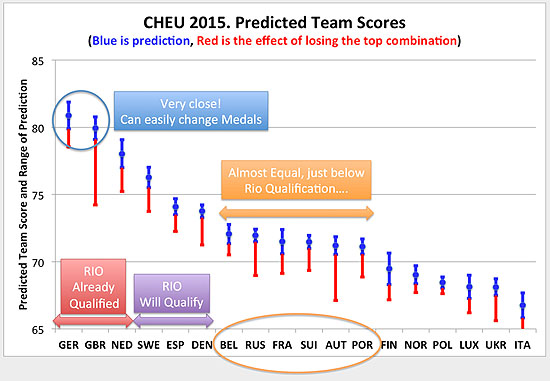 The blue-points show the most likely predicted score and the blue-bars the probable range in scores if things go well or not so well for the team. The red-bars show what could go wrong if the top couple bombs.

While Germany looks to be favorite for the Gold, Britain can take that medal if things go well for them, or badly for Germany, we are talking about fluctuations of a third of a percent per rider making the difference! The Netherlands are almost guaranteed Bronze and Sweden almost guaranteed the 4th place and thus the first new Rio qualification. Spain and Denmark are extremely close, but they are the most likely to take 5th and 6th position between them and thus earn their Rio tickets. But if they hiccup there are six nations almost on exactly the same level and ready and waiting to take their places! (Belgium, Russia, France, Switzerland, Austria and Portugal).

We also see how some nations, notably Britain and Austria rely heavily on one super star. If Valegro has a problem then Gold is out of the window and maybe any medal at all for GBR; Sweden could join the medal winners.

I’m looking forward to being there on Wednesday and Thursday to watch the sport unfold and enjoy some beautiful dressage.