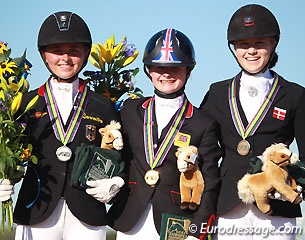 At her last international show aboard the 13-year old SL Lucci, British Phoebe Peters came, saw and conquered at the 2015 European Pony Championships in Malmo Sweden. She was the 2013 European Pony Champion in Arezzo but lost the title to Semmieke Rothenberger in 2014. In Malmo there was no competition for Peters with Rothenberger absent from the event. The Brit produced three high class tests that each scored over 80%. On the final day she put the icing on the cake winning Kur to Music gold with her third world record score, 85.825%. Nadine Krause got silver and Sara van Deurs Petersen captured the bronze.

Peters and SL Lucci were a league of their own and the judges' panel - consisting of Wessels (GBR), Sanders (NED), Jena (SWE), Christensen (DEN) and Ebert (GER) - confirmed this by unanimously placing her first in the freestyle finals on Sunday 9 August 2015. Peters rode to filmic music, arranged by Tom Hunt but it made one wonder where the fun pony factor was in those heavy tunes. 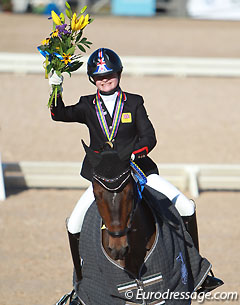 On a technical level the pair was flawless. They entered in collected walk, followed by the halt and straight into a trot half pass left. Lucci showed very good bending in the traversal movements, but lost a bit of the suspension in the shoulder in left. The extended walk had good activity and overstep and all simple changes were elegantly ridden. What sets this pair apart from the rest is the incredibly constant image they produce. Every single stride is ridden in balance, the pony is constantly up in the bridle and the rider quiet with the seat, hands and aids. The tempo is consistent and Lucci shows proper differentiation between the collected and extended work. Peters upped the degree of difficulty in her kur by riding a simple change with one hand.

The pair achieved their second World Record score of the week, 85.825% and now holds all three world records in the FEI pony division. "I had set myself the task of achieving over 80% in three tests at the same show but didn't do it this season. I never expected it to happen at the Europeans," Phoebe admitted. The rider is over the moon with her triple gold feat. 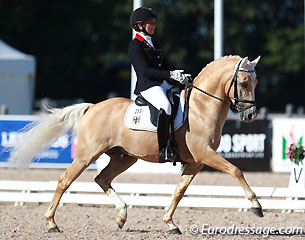 Nadine Krause achieved triple silver in Malmo. Aboard the 9-year old Cyrill (by Champion de Luxe), the German brought upbeat and fun music to the show ring. Riding to a medley of Grease tunes, Krause executed a high energy, high tempo test that didn't bore for a second. The halt at entry was square but not immobile. Krause rode an interesting combination of trot extensions transitioning into half passes. The one on the right was a bit too high in tempo though. The collected walk could have been slightly more collected but the extended walk was very good. In the left extended canter the pony lost some roundness and swing in his stride and there was a loss of rhythm in the final trot extension on the centerline. Still it was a cool freestyle and Krause scored 80.550% for silver. 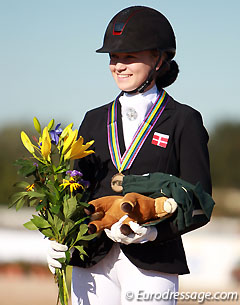 Denmark's Sara Van Deurs Petersen finally accomplished her mission in Malmo; she got the individual medal she showed was in store in the team test. In her last year at ponies and with only two years of international competition under her belt, Sara peaked at the right time. Her 12-year old dark bay gelding Farbenfroh (by Farewell I) is quite petite and short legged and he could not produce the same swing and relaxation in the individual test and dropped to fourth place on Saturday. In the freestyle, however, they were on top of their game and got the job done. Riding to a folk style music, Van Deurs Petersen still had to manage the trot work with a lot of precision as the pony can get a bit quick in the tempo and short in the stride (especially in the shoulder in left) which makes him drop in the poll, but the walk tour was lovely and the canter work very nice with super balance. The rider stayed calm and collected throughout. Some simple changes were a tiny bit short in the walk but overall the canter was the strongpoint of the test. Van Deurs Petersen finished her freestyle with a one-handed extended trot. They scored 77.825% for bronze. 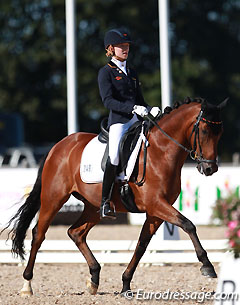 The individual test bronze medalist Helen Erbe landed fourth place in the Kur with a very generous score considering the mistakes they made. Erbe rode one of the youngest ponies at the show, the 7-year old Charly Brown (by Champion de Luxe) and his inexperience and lack of power behind showed on the final day of competition. The bay gelding had the hind legs out in canter on numerous occasions, avoiding to take the weight on the hindquarters and truly collecting from behind. Erbe rode to entertaining music with quite some lyrics in it and it highlighted her floorplan. The pony made an unscripted flying change in the left extended canter and broke into canter in the trot extension. There was also a mistake in the rhythm in the final trot extension. In walk, the pony got too slow behind even though the extended walk had nice overtrack. The pair posted a score of 75.625%. 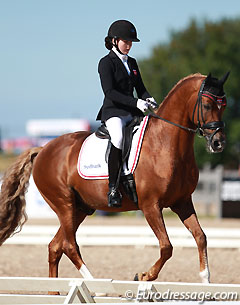 Danish team new comer Louise Christensen completed the top five in the freestyle. Aboard the 12-year old Vegelin's Goya (by Verona's Bo Gi) Christensen rode to spacey instrumental music, which made one wonder whether this actually was a child's choice as it sounded way too mature and out of place for a pony combination. Christensen's gorgeous chestnut stallion showed nice, clean trot work which lacked a bit of pezzaz. The shoulder in left, though, had good swing in the back. The walk was better in its ground cover and rhythm compared to the individual test but the walk pirouette was slightly hesitant. Overall the canter tour was solid, but in the counter canter the pony lacked some suppleness in his stride. The pair scored 75.300%

Eurodressage's Astrid Appels was on the scene and took photos of all dressage riders . If you are interested in ordering prints, collages, photo albums or digital images, send us an email with your name at info@eurodressage.com