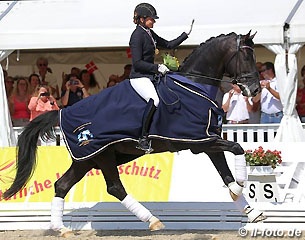 The expectations were high, but the shiny black-brown Danish stallion Sezuan lived up to them completely: After winning the title in 2014, Sezuan (by Zack x Don Schufro) now also won the World Championships title in the division of six-year-old dressage horses in Verden on Sunday 9 August 2015.

“I have almost no words to describe it,” said his rider Dorothee Schneider, “but I am very happy and delighted.”

The judges awarded the partial score of 10 twice for the Danish warmblood stallion Sezuan. This victory complemented the tremendous success of the DWB, the Danish Warmblood Association, at these championships. Danish horses won three of six medals. Sezuan earned highest scores for his canter and overall impression – the trot was honoured with 9.7 and his submissiveness with 9.8, the walk with 9.1.

Sezuan lives at Gestüt Peterhof of Prof. Edwin Kohl and Arlette Jasper-Kohl in Perl-Borg in the south-west of Germany. Linette Jaeger is his breeder. Dorothee Schneider emphasizes that the plans are now to carefully and smoothly further advance the stallion. “And then maybe the Nuremberg Cup, we will see. There is no doubt, he is certainly a horse for the big tour.” 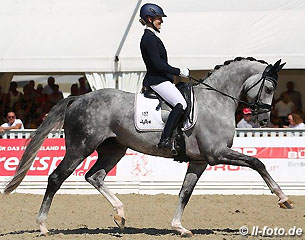 Silver went to the DSP-stallion Belantis (by Benetton Dream x Exposé). Madeleine Winter-Schulze and the stallion’s breeder, the Neustadt/Dosse National State Stud, share equal parts in the stallion. Beatrice Buchwald had already presented the gorgeous grey horse at the 2014 World Championships, and now she piloted the brilliantly moving stallion to a final score of 9.5 and was happy and satisfied. “Everything was fantastic today, as it should have been.” DSP Belantis simply had a fantastic work ethic. And the result of the rider in the stable of Isabell Werth created some kind of pressure. “I already thought it wouldn’t be that easy when I heard about the scores of Beatrice,” smiled Dorothee Schneider. Now the stable Werth has already earned a medal in 2015, and the boss can furnish another one at the European Championships in Aachen.

The third-placed Kirsten Brouwer from The Netherlands felt free from higher expectations. She rode the KWPN-stallion Eye Catcher (by Vivaldi x Partout) with a final score of 8.96 to the bronze medal, as in 2014. “Our presentation on Friday was not that perfect, he did not show what he usually shows. Therefore, I am simply happy that he presented his super capabilities today.” The combination Brouwer/Eye Catcher will continue to exist as Brouwer’s sponsors acquired shares of the stallion so that horse and rider will continue to work together in the future.

The Future of  Verden 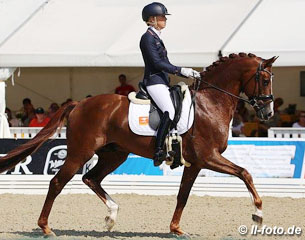 In 2016 the World Young Horse Championships will move to Ermelo, The Netherlands, but that does not mean the end of Verden. The Verden Organizing Committee announced to immediately start with preparatory work for 2016 after the International Dressage and Show Jumping Festival. As the CDI/CSI Verden had already been held before the FEI World Breeding Dressage Championships of Young Horses. Under the aegis of Rainer Kiel, Head of the Organizing Committee who was responsible for the international tournament for the 25th time this year, CDI as well as CSI have considerably improved parallel to the WC, the event is very popular in Germany as well as abroad. We will continue to integrate young horses in the different disciplines on the occasion of the international event as this is what is important for breeding and sports,” emphasized Dr. Werner Schade, Breeding and Business Manager of the Hannoveraner Verband.

This year, the pilot project for five- and six-year-old dressage ponies was already launched and met a lively response. Besides, Verden will and can make itself known and apply for other championships, too. Verden has been underlining its competence as venue of the World Championships for more than 15 years. The International Dressage and Show Jumping Festival in Verden will also be held at the first weekend in August in the Olympic year 2016.