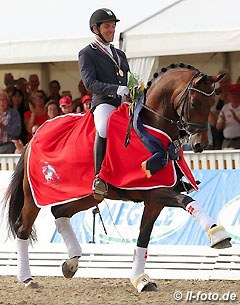 "I feel fine," said Severo Jurado Lopez, and this was already obvious before the finals for 5-year old dressage horses were over on Saturday afternoon 8 August 2015 at the World Championships for Young Dressage Horses in Verden, Germany. The Danish based Spanish rider rode the Danish mare Fiontini to victory and the gold medal in the 5-year old division.

The 25-year-old Spanish rider and the Fassbinder x Romanov daughter won the WC-title with a final score of 9.18. She was just ahead of Fiontini’s full sister Fiontina. The two Danish warmblood mares were carried by surrogate mares and are the product of an embryo transfer.

"She was always concentrated on me and my aids, a super horse," said the rider who felt a bit of the high expectations placed on him, "but when the competition starts, you only concentrate on your performances." Jurado Lopez had already won the qualifier with the big-framed brown mare. 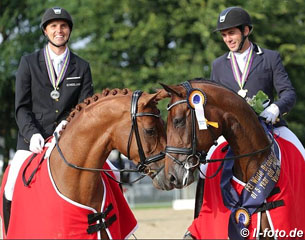 Following eighth place in the qualifier, the Danish rider Andreas Helgstrand now won the silver medal with the chestnut mare Fiontina, scoring 9.02 and thus complementing the sensational success of the breeders of both horses – Hanne Lund and Henrik Hansen from Denmark. But the title did definitively also create enthusiasm with breeders and owners when it comes to the next generation. Fiontini – new World Champion of Young Dressage Horses – and the Danish stallion Sezuan, 2014 World Champion and also favourite for the title this year, have already a common foal – Souvenir.

The best German horse of the WC-Final finished third, the Hanoverian stallion Quantensprung (by Quando-Quando x Donnerhall), a noble liver chestnut with a first-class dressage pedigree. His rider Vera Nass, who presented Quantensprung for the breeders’ alliance B. Wahler and A. Böckmann in Verden, piloted the youngster with an easy contact and slight aids through the final test. 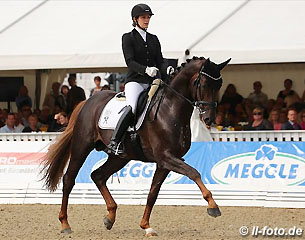 The stallion received four scores of 9 and better – Vera Nass and the stallion earned top scores for all three basic gaits which was no surprise for Manfred Schäfer, Chairman of the Hannoveraner Verband. “Quantensprung was already very popular at the Stallion Licensing three years ago,” smiled Schäfer.