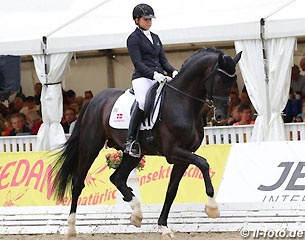 Sezuan already won his first WC-title in Verden in 2014 and now the impressive Danish warmblood stallion dominated again. The black-brown stallion won the qualifier for the WC-Final with a final score of 9.52. Rider Dorothee Schneider’s (Framersheim) answer to the question about the highlights of the presentation: “Everything was perfect. Sezuan is simply a “limelight hog". He wants to be the best, he wants to please.”

And the basics are as perfect. The stallion, bred by Linette Jaeger and owned by the Gestüt Peterhof, scored 9 and better in all five evaluations, actually 9.8 for the canter and overall impression. 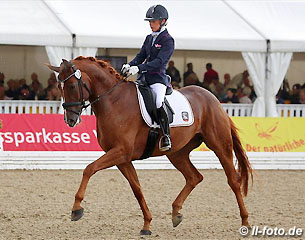 The chestnut Hanoverian mare Danza (by Dimaggio x Rubin Royal) placed second with a final score of 8.98. Presented by Julia-Katharina von Platen Danza was the runner-up in a field of 36 participating 6-year old horses.

Third place went to the DSP stallion Belantis and Beatrice Buchwald (Rheinberg) who were fourth in 2014. The grey stallion, bred by the Brandenburg National State Stud Neustadt-Dosse, captivated again with his movements and was awarded a final mark of 8.9.

“He is even more balanced, but I indeed really love his work ethic,” said Beatrice Buchwald enthusiastically. “He is simply “on” as soon as he enters the arena – sometimes still a bit too eager – but he always loves to work.” 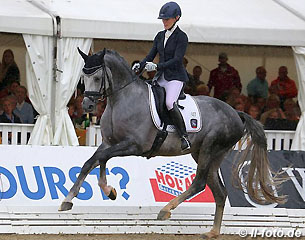