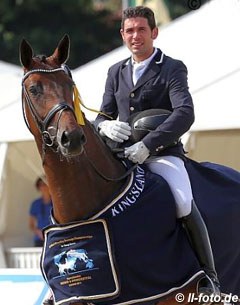 Both Fiontini and Fiontina are by the stallion Fassbinder and out of Rapitalá (by Romanov). Bred by Hanne Lund and Henrik Hansen, Fiontini is still owned by the breeders, whereas Andreas Helgstrand owns a half share in Fiontina.  The highly talented embryo transfer products wrote  championship history as there has never been a similar duo in Verden before.

Both mares already caused a sensation at the 2015 Danish Warmblood Young Horse Championships, staged on the occasion of the Danish Stallion Licensing in March where they impressed multiple Champion Charlotte Dujardin (Great Britain). The double Olympic Champion was test rider at the young horse championships and was enthused about Fionini and Fiontina: “I honoured both mares with the highest score of 10, however, I would have preferred to award even higher marks such as 11 or 12 for their rideability – they are simply incredible. Fantastic horses.” 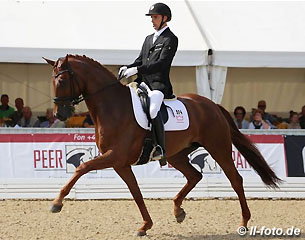 No wonder that the Danish “followers” who travelled to Verden watched the WC-qualifier of the two mares full of expectation and enthusiasm. Severo Jurado Lopez was completely satisfied with the presentation of his sports partner: “She was supple and relaxed, I hope everybody could see that she loves to move and that she is completely satisfied.” The judges even awarded the highest score of 10 for her trot and 9.8 for overall impression. Loud cheering accompanied the performances of Fiontini, and this storm of enthusiasm also slipped over to the Grand Prix- and Riders’ Stadium.

Full sister Fiontina was presented by Andreas Helgstrand and finished eighth with a final score of 8.86 – both mares qualified for the WC-Final.

Dutch horses came in second and third in the qualifier: the stallions Five Star (by Amazing Star – Jazz) under Kirsten Brouwer (9.44) and Four Legends (by Wynton – Ferro) with Marieke van der Putten (9.32). Best German bred horse was the Hanoverian stallion Quantensprung (by Quando-Quando out of a Donnerhall-dam), presented by the owners’ alliance Wahler & Böckmann and ridden by Vera Nass. His presentation was honoured with a final mark of 9.18.  The 12 best horses of this opening competition immediately qualified for the WC-Final on Saturday, three more still have the chance to qualify in the so-called Small Final on Friday.