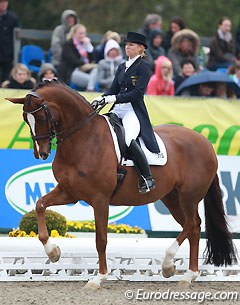 Girasol is a 14-year old Baden Wurttemberger bred mare by Gribaldi out of Lerida (by Landioso x Kalman). She is bred by Matthias Schönenberger and was introduced to national Grand Prix level by Jasmin Schaudt.

Schaudt and Girasol made a stellar impression when they rode their first national Developing Grand Prix horse class at the CDI Hagen in 2010. Two weeks later the liver chestnut mare sold to Nadine Capellmann as successor for Elvis.

The combination began competing at international Grand Prix level in March 2011 and had mixed success. At the time Capelmann was in limbo when in came to being trained. For a while she worked independently, then had Jurgen Koschel by her side, then she went independent again. More recently she has gone back to her coach of former glory, Klaus Balkenhol.

"She's a delightful horse who has everything one can ask of a high performance sport horse. It was love at first sight for me," Capellmann explained. "Unfortunately the past five years we couldn't consistently show our connection in the arena. Girasol is an incredibly sympathetic horse which I have ridden with much enthusiasm every day. Lately I have asked myself if I could imagine a future with Girasol under a different rider. It was a difficult decision, but I wish the young Spanish team rider Morgan Barbançon much happiness and successful with Girasol."

Barbançon is ecstatic with a new Grand Prix horse to her collection. "I'm the luckiest girl on earth. Today I had the chance to welcome Girasol to the team. Thank you mom and dad for giving me always the best opportunities. I can't thank you enough! Let us start a new adventure with this beautiful red hair diva."