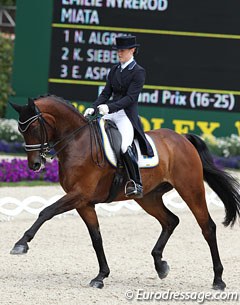 The Swedish equestrian federation and Swedish team captain Bo Jena have announced the team that will represent Sweden at the 2015 European Dressage Championships in Aachen, Germany, on 12 - 16 August 2015.

Bo Jena and team trainer Kyra Kyrkland picked the team for Aachen in co-operation with each other. There are no real surprises, although Emilie Nyrerod is replacing 2014 WEG team member Jeanna Hogberg who has not competed her top horse Darcia (by Danone I) since the 2014 CDI Mechelen in December.

"We have never had so many great combinations to choose from this year and we have never had riders riding at such high percentage as those who are now part of the squad," said Bo Jena.

Jena commented that Nyrerod are "the rookie of the year. She has had an amazing development and met all expectations."

The Swedish team for Aachen includes

The first reserve is Paulinda Friberg on Di Lapponia T.