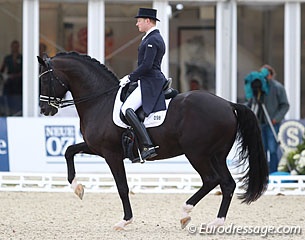 Totilas' highly anticipated second show career come back at the 2015 CDIO Hagen on Friday 10 July 2015 proved one thing: the 15-year old Dutch warmblood stallion still got game! Matthias Rath and the black stallion scored 80.360% to win the 4* Grand Prix well ahead of Anabel Balkenhol on Dablino (76.340%) and Fabienne Lutkemeier on D'Agostino (74.340%).

Totilas' saint like status has not disappeared after another year away from the public eye, recovering from injury. The judges love the black beauty whose legs still fly up in the air with grace and elegance and the horse continues to mesmerize the crowds with his beauty, filling the stands to the roof and bringing mainstream TV to shows. In 2009 the judges put themselves into an impossible position at the European Championships in Windsor, by awarding Edward Gal historic high marks and world records. Ever since it is just impossible for them to lower their scores below a 7, no matter how well executed a movement is or not. Only if the stalion makes a blatant mistake - like jumping out of the arena - will they come down with their marks and award proper scores. It is unfair to blame Totilas for his golden-boy status.. The same situation has happened with Charlotte Dujardin's Valegro. We all remember the train wreck Grand Prix at the 2014 CDIO Aachen where Dujardin made one mistake after another and still ended up with a 76.9%. Any other horse-and-rider combination would have seen their score plummet to a 64% with that amount errors, but this does not happen with god-horses-amongst-mortals. Totilas and Valegro are two, but there are a few more around who get much more credit from the judges than others. 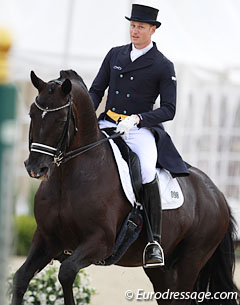 The begin and final halt were square but the horse stretches the hindlegs out from under body, so he is not standing in full balance. The trot extensions remain to be a weak point, as ever. Yes, the front legs fly in the air, but behind he just does not track up. The first one was below par with hardly any overtrack (score 7.5), in the second one he generated only one hoof overtrack (7.5 - 8) and the final trot extension was the weakest one as the horse became very tender and uneven after X when the rider asked for more power (7 - 8). The trot half pass to the right was too passagey and therefore uneven in the rhythm (7.5 - 9) despite its scope, the left one far better in rhythm but the hindquarters should have been more parallel. Totilas has such amazing elasticity and bounce, making him such a graceful dancer, but his head bops a bit more than usual, especially in the passage. It should stay more fixed with the poll as highest point. All the passage work was really lovely though and of such high quality. The first piaffe travelled too much forward. The extended walk was outstanding with very good relaxation and overtrack. Throughout the test Rath kept a very light contact with the bit, but the curb rein was always on as if riding on a blank curb. The horse opens the mouth frequently. The second passage was lovely, but the second piaffe was again too  forward and the head should have been steadier at the poll. In the canter work Totilas developed good energy and uphill strides. The two tempi changes were big but the horse swayed the hindquarters to the right (7.5 - 8).  The zig zag was well ridden and spaced out but Totilas got below the vertical. In the one tempi changes the horse struggled with the changes to the left, which were shorter than the ones to the right and one of them not coming through at all (5 - 6.5). The pirouettes were nice and small with each stride well jumped.  The passage on the final centerline was delightful, but the piaffe at X only had 10 steps instead of the required minimum of 12 and travelled too much forward (7 - 9). The stretched but square end halt scored 7 to 9.

The overal impression of the test was certainly a good one. Matthias Rath did a wonderful job, professionally steering the horse through the Grand Prix. He deserves commendation for a very good ride and
for his nerves of steel. Body condition wise the stallion looked more muscled
than last year, especially has neck has got even bigger and crestier. For the fairness of the sport and out of respect towards the other competitors -- which do have to fight for each point earned -- the judges need to stay sober and focused on Totilas' tests and judge what happens in front of them instead of rewarding name and fame. If Totilas can stay fit until the 2015 European Championships, the fight for medals in Aachen will be a very exciting one. He makes the sport more exciting and it's great to have him back! 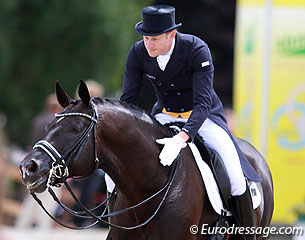 "I was no so nervous. I know the situation from 2012 and 2014. In 2012 I started here in Hagen (ed.note:  first time trained by Sjef Janssen) and I was not more nervous then than now. It's nice to begin where I ended last year after five shows. I need some competition experience, the horse needs a few more shows to get into a routine. I have to practice. Today in the one tempi changes he did not change behind twice. I have an extremely critical trainer and we'll work on it." When asked if he likes the crowds' attention here in Hagen, Rath replied, "it's nice that so many people are interested in Totilas and that so much is reported on dressage. I've learnt how to deal with it in 2011."

The hot potato is whether this one show in Hagen suffices for German team selection for the 2015 European Championships. German team trainer and selector Monica Theodorescu did not yet want to hit the nail on the head. "Let's first end the show here and if everything looks good we'll sit together. Totilas looks very good. He's in good condition, gives a fit impression. There are still a few things here and there and he lacks show routine. The team will be decided at the end of the week. At the end of this show we'll sit together and Tuesday we'll release a long list (8 members). We want the best and most competitive team." Rath said that if he needs another show to prove form, "my tendency is more towards doing something like in Hulten" (a local schooling show in Holland). 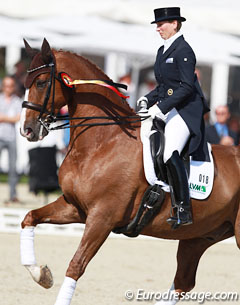 Team selection is the topic of discussion in Hagen with the A-team riders there vying for a spot. Kristina Sprehe and Isabell Werth (on Don Johnson) proved form oin the CDIO Grand Prix. It is most likely that Totilas will be on the team if he stays fit, which means that the fourth spot is probably going to Jessica von Bredow-Werndl.  Other serious candidates for a team place are Hubertus Schmidt, but he couldn't produce the same scores on the board in Hagen as he did in Balve. Anabel Balkenhol has turned out to be the strongest contender on the 15-year old Hanoverian gelding Dablino (by De Niro x Wanderbusch). The pair has also been in sick bay, both rider and horse, but they returned on strong form in 2015.

At the CDIO Hagen, Balkenhol and Dablino showed peak condition with her impressive chestnut gelding moving like a star. Dablino is such a strong mover, uphill in the bridle, powerful from behind. He might not have the elasticity of Totilas, but the quality of the trot and canter is superior to the black stallion. Dablino would certainly be an 80%+ horse if he has a better walk. The horse just can't walk with a clear rhythm and big overtrack. His 6 scoring walk always keeps him under 80%. Balkenhol got 76.340% for her Grand Prix in Hagen, but that score could easily have been 78 or 79% as well! The canter work was world class with such straight, uphill flying changes and tiny pirouettes. The trot extensions were for a 10 and also the piaffe was rhythmical AND on the spot. It must have been a personal best ride! 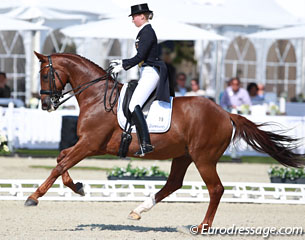 "I'm very happy and in awe," said Balkenhol at the press conference. "We had a good test with a little mistake in it. He had to poo in the trot half pass, which is unfortunate, but the piaffes were good. One thinks about the European Championships and you want to do a good performance. Now we'll do the Special and then we'll look where we stand. I wished for a point more here and there, especially for a faultfree test. He's been very consistent this year."

Fabienne Lutkemeier, German team member for the 2013 Europeans and 2014 World Equestrian Games, finished third aboard her 15-year old Hanoverian gelding D'Agostino (by De Niro x Shogun xx). The long legged chestnut always impresses with his engaged and ground covering trot extensions and straight tempi changes, but the passage work was not always regular with more left hind leg activity than right. D'Agostino was always nice and up in the bridle with the contact more steady. The extended walk was good, but in the collected he was close to becoming lateral (score 7.0). The right pirouette was big. The pair scored 74.340%

"You can always use a few extra points. My horse went a good round. He's very consistent. I'm happy," Lutkemeier noted.

Eurodressage's Astrid Appels took photos of all CDI 4*, Under 25, and small tour riders competing in Hagen. If you are interested in photos, contact us by email with your name and the name of the horse