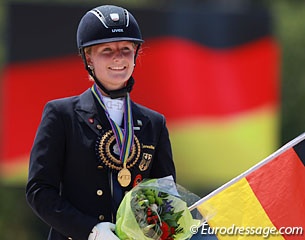 The last class of the 2015 Europeans was on Sunday noon and after five days of competition in the sweltering heat and 42° degrees, the show came to close with some last, high level riding. The judges for the kur were Raphaël Saleh, Christof Umbach, Andrew Gardner, Thomas Lang, and Francis Verbeek-van Rooy. Bianca Nowag had Reiner Bockholt's Fair Play RB (by Fidermark x Brentano II) sharper on the aids compared to the individual test. The liver chestnut mare was outstanding in the trot, which was well carried, engaged and balanced, also in the shoulder in and half passes. There was much relaxation and confidence in all movements, the canter pirouettes were small and well collected. The extended walk could have had a bit more overstep but the mare was striding actively. Nowag rode a difficult movement going from collected walk straight a canter half pirouette. The four tempi changes were on the curved line. Nowag finished her high quality test with a one-handed line. Riding to Lion King and instrumental sax music, the German duo scored a whopping 82.775% for the gold. Three judges had her first, two second.

"My horse was fantastic, I rode the freestyle of my life," said an ecstatic Nowag. "I made the choreography myself and the music was done by Thomas Stratmann." Nowag will now give her horse a small break and then start preparing her for the 2015 German Championships in Zeiskam. 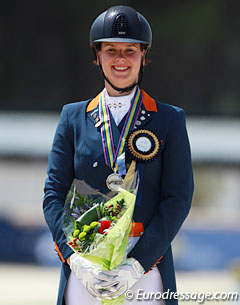 Dutch Dana van Lierop landed the silver medal in the Kur after winning gold in the individual test. Van Lierop and Jochen Arl's 10-year old Oldenburg mare Equestricons Walkure (by Romanov x Donnerschwee) rode a freestyle to very soft music that highighted the elegance of the mare. The degree of technical difficulty was not very high, with a lot of simple lines. The mare was very graceful in trot and always steady in the bridle. There could have been a bit more swing through the back and she lost the rhythm in the left volte. The walk part was very good. The canter work was very confirmed but the horse got slightly crooked in one change after the half pass. The tempi changes were nice and straight, but Van Lierop miscounted once in the tempi's. She scored a massive 81.225%, ranking first with two judges (Lang, Verbeek), second with two (Saleh, Gardner) and fourth with one (Umbach).

"She still felt very good after three days. She was fresh and forward. I just made that stupid mistake in the four tempi's. I was so with the music and not with my horse, so I made that stupid mistake. The trot was better today. I'm very happy," Van Lierop commented. "By the way, I had never practised this freestyle. It's brand new and I only got it on Tuesday," she added. Dana will be giving Walkure only a few days off as next week it's the Dutch Championships in Ermelo. 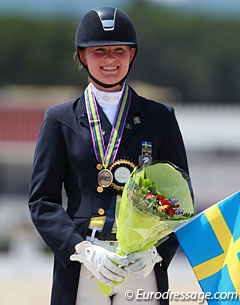 Swedish Marina Mattsson scored her second bronze medal on the weekend aboard Patrik Hannell's 12-year old Swedish licensed stallion Double Diamond II (by Don Primero x Romadour II). The trot work was immaculately ridden, with a good flow and decent engagement from behind. There was a loss of rhythm in the right volte and shoulder in but overall the trot work was strong. The tempi changes were well executed, the pirouettes showed the horse's ability to collect and take the weight on the hindquarters. The extended canter could have been more uphill. Mattsson rode the canter half passes zig-zag style. The extended walk was outstanding. The Swedish rider posted a score of 79.350%, which was a personal best result.

"My horse was very fresh. At the beginning of the week I thought it would be very tough," Mattsson explained. For Vidauban she brought the music of her 2013 European Championship ride Cassio. "We made small changes to it. It works pretty well for Double Diamond." 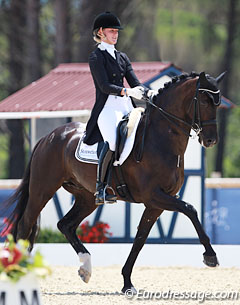 Dutch Denise Nekeman and the 9-year old KWPN bred stallion Boston (by Johnson x Quattro B) slotted in fourth. Throughout the week Boston did not lose a fraction of freshness and also on Sunday he was sharp, quick and engaged. The rider should keep her hands more still as the half-halting, especially in trot, meddled with the steady head-neck position of the horse. Nekeman rode to catchy lounge/trance music and kept the lines of her foorplan fairly easy. The trot extensions were outstanding, the extended canter was beautiful. In the extended walk the horse could swing more through the back. The right half pirouette was a bit big, the left one better. The duo scored a strong 78.375% to become the highest ranked Dutch pair in the class.

Claire Louise Averkorn and her 11-year old Hanoverian Condio B (by Contendro x Willem's As) landed a well earned fifth place. Her dark bay gelding is not a spectacular mover but the combination impresses with their accuracy, softness in the bridle, and immaculate test riding. The trot extensions were good in ground cover, but lacked bounce. The extended walk had plenty of overstep but could have been more active. The horse got stuck in the left canter pirouette, the right one was far better. Condio B is very solid in the flying changes.  Their music was non-descript though and did not do much to improve the overall experience of the ride. They posted a score of 77.350% on the board.