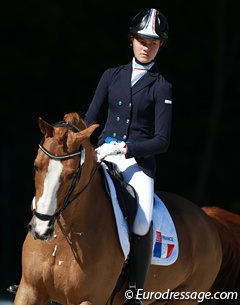 The French Equestrian Federation and team trainer Alizee Froment announced the team that will represent France at the 2015 European Pony Championships in Malmo, Sweden on 5 - 9 August 2015.

The French pony riders had their final team selection trial at the 2015 French Pony Championships in Lamotte-Beuvron on 1 - 5 July 2015.

"They all did a great job at the French Championships this weekend," Froment told Eurodressage. "After a hard Compiegne,
Tim was back at the top of his game and won with a total of 74,1%. Diana with his new little rider finished second with a total of 72%. Osbourne with Mathilde was third with 70,7% and Robinson and Jules were fourth with 68,7%.  Domenik with Manon finished fifth with 68,5%."

The riders that have been selected are: