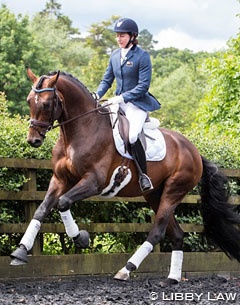 New Zealand will be sending its first horse to the World Young Horse Championships in Verden, Germany on 5 - 9 August 2015. Shiwon Green and F1 are New Zealand's first representatives ever to qualify for Verden.

The qualification process was arduous with performance criteria; a nomination from the New Zealand National Federation and approval from both the Oldenburg stud book and British Dressage as her nation of residence was needed before she was accepted.

"It truly is a great honour to be the first New Zealander to ride at this elite event," said Green. "I am looking forward to showing off my fabulous horse in this, the ultimate show for young horses internationally. To be creating history once again with the first horse I have campaigned in Europe is awesome."

Shiwon just started training with Charlotte Dujardin to prepare for Verden with the longer term goal of competing at the 2020 Olympics.