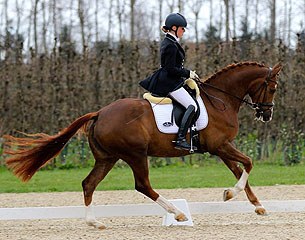 The Belgian Equestrian Federation has selected the four horses that will represent Belgium at the 2015 World Championships for Young Dressage Horses in Verden, Germany, on 5 - 9 August 2015. The Belgian horses were picked by a group of selectors at a Young Horse Finals held in Overijse, Belgium, on Saturday 20 June 2015.

The ten highest ranked horses from the six selection trials between April and June were invited to the finals at the CDN Overijse. The ground jury at the finals in Overijse consisedt of two panels with two official judges and two experts (Peter Engel and Patrick Collard) appointed by the Belgian Dressage Committee. They decided on the final ranking of the horses.

The horses qualified for Verden are:

The winner of the 5-year old division in Overijse, Julie Dossin on First Lady, was not up for team selection as she did not compete at the required minimum amount of selection trials to be considered.