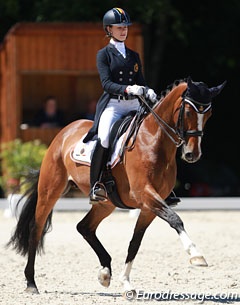 The 14-year old Belgian junior rider is the youngest dressage member to sign a sponsorship deal with Jonathan Sitzia's Cavalleria Toscana, which produces the finest Italian equestrian fashion with high tech fabrics in functional, fashionable styles.  The brand will be providing Arl with a full collection of riding clothes for daily training and competition for the next two years.

In her first year at junior riders' level Antonia Arl has been selected to represent Belgium at the 2015 European Junior Riders Championships in Vidauban, France, on 1 - 5 July 2015, where she will be amongst the youngest in her age division. To prepare her for this season highlight event, Antonia competed at the CDI's in Drachten, Wellington, Saumur, Odense and Compiegne and booked numerous victories and top three placings. 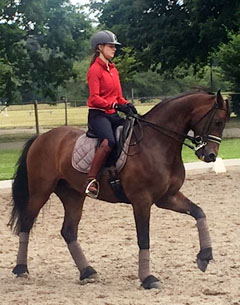 Antonia is trained by Dutch Nicolet van Leeuwen and is riding the experienced European medal winning horse, Equestricons Ziggy (by Riverman).  The 2015 Euro Championships in Vidauban will be Antonia's second European Championships. She already represented Belgium at the 2013 European Pony Championships in Arezzo, Italy.

The tall and slender Antonia outgrew ponies quickly and has been competing at junior level in 2015. Next year she will be stepping it up and getting her feet wat at Young Riders level with a new mount, the 11-year old Westfalian bred Equestricons Laredo (by Lacock x Pablo). The Grand Prix level trained Laredo will also be suitable for her to transition to Under 25 level later on.