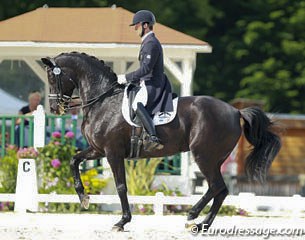 It was the black mare's come back to the CDI show ring after a three-month break in which she underwent treatment to her ovaries to get her in a better physical and mental shape.  In Compiegne Boblet seemed to trust more on his mare's abilities but the rider still get unsettled  himself in the troubled piaffe work, spurring his horse suddenly forwards instead of waiting patiently for the mare to transition to passage. The tempi changes showed improvement and the trot work is always extremely elegant and light footed. 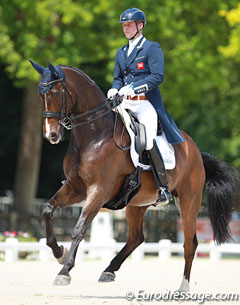 "Until now, Noble Dream and I were scoring marks varying from 70% to 71%, which is insufficient," Boblet commented. "The owners and I took the joint decision to have her operated as she suffered from swollen ovaries which was painful for her. It was a good decision as she is now relieved and she can express herself more naturally. It's her first time out since the operation and we are very pleased of her. She was energetic, very competitive, she is much better now. Obviously there were a few faults but they can be quickly rectified. We only went out twice during the winter so we need to get our automatisms back. Sunday we will dispute the Grand Prix Special; it's an event that gives the possibility to gain points to move up the world ranking."

British Spencer Wilton made an impression on his two Grand Prix horses, Stiller and Cournane's 14-year old Dutch bred Numberto (by Negro x Ahorn) and Jen Goodman's 12-year old British Hanoverian Super Nova (by De Niro), who was discovered as a youngster by Carl Hester and Roly Luard.  Especially Super Nova showed world class potential but his Grand Prix test was stilled riddled with small mistakes and inaccuracies. Super Nova scored a generous 71.540% in the Grand Prix and has much more in the tank. This is a horse to watch! In the Special the pair was second with 73.118%. 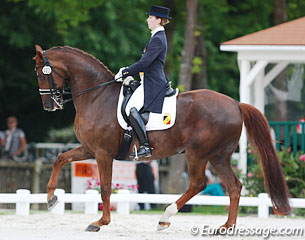 Belgian Laurence Vanommeslaghe made her first international show appearance on her 16-year old Hanoverian gelding Avec Plaisir (by A Jungle Prince x Hitchcock) since the 2014 World Equestrian Games last August. The liver chestnut gelding appeared in a much better body condition -- not as lean -- and still thrilled the crowds and judges in the piaffe and passage with his textbook executions of the movement. They were third in the Grand Prix (70.600%) and third in the Special (72.275%).

Judge Jean Michel Roudier commented after the Grand Prix that, "Noble Dream and Marc (Boblet) took first place and it was obvious for the judges. He did a beautiful performance. There were two other great tests, those of the British rider Spencer Wilton, with his two horses but with a few mistakes that made the differences in my eyes. In the last lot of horses, very solid couples averaged around 70%."

Eurodressage's Astrid Appels took photos of the majority of riders competing in Compiegne. If you are interested in photos, contact us by email with your name and the name of the horse