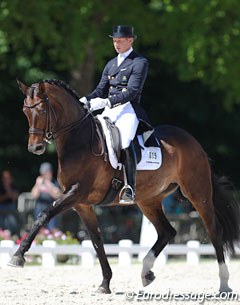 Fresh from winning the big tour at the 2015 CDI Hagen, Swedish duo Patrik Kittel and Deja swept the 4* Grand Prix division at the gorgeous 2015 CDI Compiegne in France on 5 - 7 June 2015. With brilliant summer weather gracing the beautiful show grounds located in a city park, the CDI Compiegne was once again a hit event with 198 horses competing.

For the first time Compiegne received a 4* status from the FEI and is only one of two CDi's in France with such a high star-label (Vidauban is the other).

Kittel and Marie Haward's 11-year old Swedish warmblood mare Deja (by Silvano x Don Schufro) scored a whopping 77.500% in the Grand Prix after a season best performance. Back to training with his old coach Kyra Kyrklund, Kittel and Deja showed progress since Hagen in April. The mare was better balanced in the piaffe and less hurried in the trot extensions. She still got wide in the last piaffe at X. The tempi changes are huge and uphill but the rider actually unsettles the mare in her balance by swinging in the saddle so much, especially in the zig zag. The extended walk was outstanding, the collected a bit prancy. The pirouettes were small but the mare was very crooked in the onset to the right one. Overall it was a lovely Grand Prix ride with more left in the tank.  Kittel also won the Kur to Music on Sunday with 78.825%. 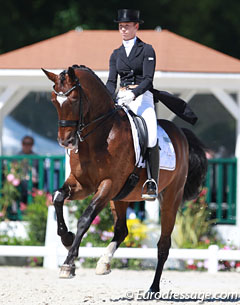 "I'm really happy of our performance. When I'm riding, I always try to do my best, just like Deja. She is exceptional. She was concentrated, very competitive, fluid and easy to ride, she truly loves to work, it's in her nature," Kittel commented after his victory. "She's the perfect partner, very complete."

Kittel's Australian student Briana Burgess finished second in the Grand Prix with 70.980%. Burgess' 17-year old Rhinelander gelding produced very nice, soft, rhymthmical piaffe work, but there was hardly any engagement from behind in passage and La Scala dropped behind the vertical. When asked for more hindleg activity, the horse got uneven with more power from the right hind leg. Also in the trot half pass left the regularity could have been better, the one to the right was much nicer. The zig zag was a highlight of the test. Burgess has a lovely, quiet seat and invisible aids. She also finished third in the Kur with 74.150% 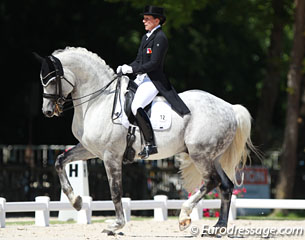 Swiss Anna Mengia Aerne landed third place in the Grand Prix on her smashing grey 14-year old Bavarian stallion Raffaelo va Bene (by Royal Diamond x Lanacar). Trained by Silvia Ikle, Aerne was able to show a beautiful classical silhouette in the piaffe and passage tour. The horse has good sit in piaffe. The canter tour was very solid and confirmed. In the collected walk the stallion lost the clarity in the 4-beat rhythm. The pair scored 70.920% in the Grand Prix and they were second in the Kur with 75.075%.

Eurodressage's Astrid Appels took photos of the majority of riders competing in Compiegne. If you are interested in photos, contact us by email with your name and the name of the horse