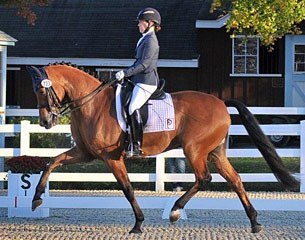 Success feels thrice as nice for Dr. Cesar Parra of Piaffe Performance right now. After a string of exceptional performances in front of the judges during the HITS-on-the-Hudson series in Saugerties, New York, he and his Piaffe Performance team have qualified three horses— Fashion Designer OLD, Toy Story, and Don Cesar— for the 2015 U.S. Young and Developing Horse Championships, to be held on August 19-23 at Lamplight Equestrian Center in Wayne, Illinois.

“We are so excited with these young up-and-coming horses,” says Katie Riley, who joined the Piaffe Performance team in 2000 and has helped bring its horses through World, Pan American, and Olympic competition since. “They are super, quality horses at the top of their sport. The Markel/USEF Young and Developing Horse programs play critical roles in the development of our future stars, and we are very grateful to have programs like this and for Markel's continued support.”

Fashion Designer OLD, owned by Martin Sosnoff and Dr. Cesar Parra, will be competed at Developing Prix St Georges level by Parra. The Oldenburg gelding (by Faustinus x De Niro) earned 75.66 percent at his last show in Florida. “He will probably do one more qualifier in July to tune-up for the Championships,” Riley expects.

Also in Developing Prix St. Georges, Riley will ride Toy Story, a Dutch gelding (by Trento B x Jazz) owned by Heather Hornor. Toy Story’s strong Prix St. Georges debut at his last Florida show this season earned him a 71.90 percent. “We will compete him locally in June and do one more qualifier in July to prep for the Championships,” Riley says of her mount.

Also keeping Piaffe Performance busy will be an exciting entry in the Five-Year-Old division, Don Cesar, owned by Dr. Cesar Parra and Marcela Ortiz Parra. The Westphalian gelding (by Desperados x Manhattan) earned 84.4 percent in his Young Horse 5-year olds Finals Test in Florida in April, and will also be competed locally through the summer in preparation for the August limelight at Lamplight.

Coming off one of its strongest winter seasons ever at the competitive 2015 Global Dressage Festival, Piaffe Performance and Cesar Parra have returned to summer operations out of Whitehouse Station, New Jersey, where another rainbow of ribbons – especially blue— are already accumulating. Next, the team will be aiming for gold with their young horses in August.