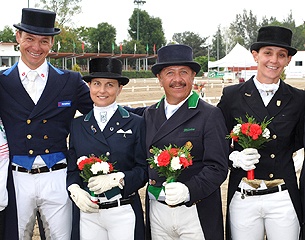 The Mexican Equestrian Federation has announced the team that will represent Mexico at the the 2015 Pan American Games in Toronto, Canada. Dressage will be held at the Caledon Equestrian centre in Palgrave, Ontario, on 11 - 15 July 2015. Mexican dressage riders were able to qualify on for the team based on their scores achieved at three trials held in the Mexico City area this spring.

The 2015 Mexican Pan Am team is the highest scoring team ever in Mexico. Never before were the qualified combinations able to score consistently above 67% in the selection trials.

The three selection trials, held in Tultepac and Mexico City, were judged by top international judges including Lilo Fore (5*) and Eddy de Wolff van Westerrode (5*). One trial was a CDI 3* in Mexico City.