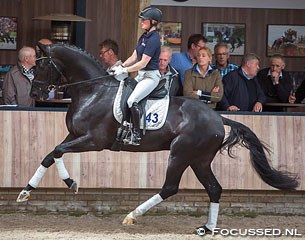 The 3-year old Dutch warmblood stallion Hennessy (by De Niro x Jazz) became the high scorer of the 2015 KWPN Spring Stallion Performance Testing which concluded in Ermelo, The Netherlands on Saturday 23 May 2015.

Seven dressage bred stallions out of 17 that began the testing were able to finish the full 50-day performance testing. A meagre amount of four scored sufficiently to receive the licensed status for KWPN breeding. The black Hennessy, which is owned by the Verhagen family and Wiepke van de Lageweg, scored the highest total of 82 points. He was initially named Handsome Boy.

"This stallion stands out with his impressive front and three good basic gaits. He has much power and self carriage in his movement," said stallion licensing committee chair Wim Ernes. "Overall this year is smaller than last year, but percentagewise it's not a set back if we see which stallions were fully licensed after the testing." 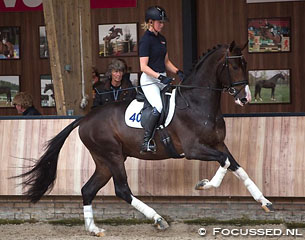 The other licensed and fully performance tested colts, which passed the testing, are High Five U.S. (by Charmeur x Negro) and the 4-year old Grappa (by Fidertanz x Special D).  The latter scored 78.5 points. The 3-year old Hermès (by Easy Game x Flemmingh), which was entered for the testing voluntarily by his owners, scored 76.5 points.

Harlow (by Amazing Star x Jazz), Hannover (by Danone I x Hohenstein) and Handshake (by Vivaldi x Donnerhall) did not pass the testing.