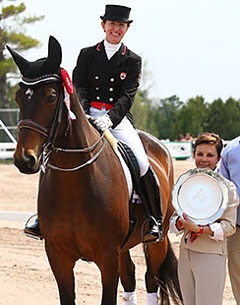 Top Canadian dressage combinations got the chance to test out the host facilities of the 2015 Pan Am Games in Toronto, while also vying for Pan Am qualifying scores during the 2015 CDI 3* Palgrave, held May 8-10 at the OLG Caledon Pan Am Equestrian Park in Palgrave, Ontario.

Belinda Trussell of Stouffville, Ont. emerged as a two-time winner in the Big Tour, earning a score of 71.000% in the Grand Prix and 72.667% in the Grand Prix Special aboard her long-time partner and 2014 World Equestrian Games mount, Anton (by Antaeus x Melit), a 15-year-old Sachsen gelding owned by Robyn Eames.

Claiming the final win of the Big Tour in the Grand Prix Freestyle was another duo from the 2014 Games, Megan Lane of Loretto, Ont., and her 14-year-old Dutch Warmblood mare Caravella (by Contango x Riverman).  Their strong routine earned the leading score of 73.350%. Lane and Caravella also took second place in the Grand Prix with a score of 69.840%.

“This sport has a continuous learning curve, which is one of the things I find so interesting and why I love it so much,” explained Lane. “Though Capri and I have been partners so long and have literally grown up together, the excitement is what new concept we can learn to further improve daily training and international events.”

Jacqueline Brooks of Cedar Valley, Ont. was also highly successful in the Big Tour with her 2012 London Olympics mount, D Niro (by D-Day x Napoleon), a 16-year-old Swedish warmblood gelding owned by Mary Brooks of Brookhaven Dressage Inc.  Together, they finished in fourth place in the Grand Prix with a score of 67.580%, before moving on to take second place in the Grand Prix Special (67.824%). 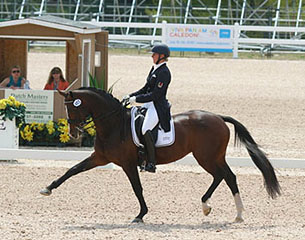 The Small Tour classes were also dominated by Canadians. Back-to-back wins were awarded to Diane Creech of Caistor Centre, Ont. and Robbie W, Doug Leatherdale’s 12-year-old Oldenburg gelding sired by Rubin Royal. The pair started out by earning a score of 70.868% in the  Prix St. Georges, followed by an impressive score of 71.368% in the Intermediaire I. Ending on a high note, Creech and Robbie W earned their highest score of the competition in the CDI Intermediate I Freestyle with 73.175% for second place.

“Robbie W continues to show very strong and consistent tests,” said Creech who had a successful winter season in Wellington, Fla. “Mr. and Mrs. Leatherdale are extremely pleased with the performances of the fondly called ‘Perfect Robbie.’ We are all keeping our focus on trying to become a strong member of the Canadian Team for the Pan American Games.”

The top spot in the Inter I Freestyle went to Shannon Dueck, a current resident of Loxahatchee, Fla. and Cantaris (by Compliment x Eiger I), Elizabeth Ferber’s 12-year-old Hanoverian gelding. They performed a highly technical routine to earn a score of 73.175%. Plus, they had success earlier in the competition, placing third in the CDI Intermediate I with a score of 70.026%.

Brittany Fraser of New Glasgow, N.S. earned her share of success in the Small Tour aboard All In (by Tango x Damiro), her 10-year-old Dutch Warmblood gelding. They finished in second place in the Intermediaire I (70.395%), as well as taking third place in the Prix St. Georges (69.000%).

In addition to the stellar Canadian performances, the facilities also earned plenty of praise. Creech stated, “We are so lucky to have access to such a high standard of show grounds. The facility and footing are incredible and will for sure make this one of the best Pan Am Games facilities. Barbara Mitchell, John Taylor, and their team do an amazing job organizing these shows and this beautiful facility will be their legacy.”