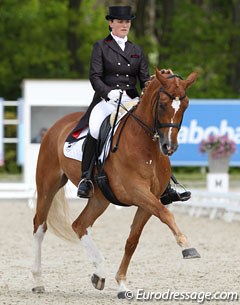 Singapore dressage rider Wei Chi Soh has acquired the 12-year old Dutch warmblood mare Whoopy (by Rubiquil x Sit This One Out xx). The chestnut mare was competed at Grand Prix level by Thamar Zweistra in 2014 and was owned by Mrs F. Maat in partnership with stable Hexagon.

Former Dutch young rider Julie de Baerdemaeker, who has declared to compete for Belgium as of 2015, has lost her small tour horse Atlantus. In the morning of Sunday 19 April, Julie found her 10-year old Dutch warmblood Grand Cru Hoeve's Atlantus (by Prestige VDL x Rossini) suffering from a severe colic attack and in shock. Despite undergoing an operation, the bay gelding could not be saved and was euthanized during surgery.  De Baerdemaeker lives in Moerbeke, Belgium and is studying in Ghent to become a veterinarian.

Dutch Grand Prix rider Timmie Visser has received the ride on the 9-year old KWPN licensed stallion Bojengel (by Uptown x Gribaldi). The bay stallion sold at the 2009 KWPN Select Sale to the trio Serge Pais, Stal de Bekelaar and Westrade Stables. Before Visser, Bojengel has been trained and competed by a string of riders including Stephanie Dorr, Kim Leduc, Janny Koks and Stephanie Peters. 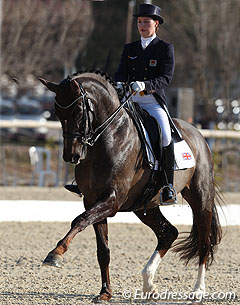 Horse and Hound reported that Anne Marie Perry has lost her small tour horse Feine Dame at the end of March. The 13-year old Westfalian mare was by Fibonacci x Acapulco and suffered from "complete mechanical failure" of the fore hoof. It led to laminitis and pedal bone rotation through the sole of her hoof. She had to be euthanized after veterinarians decided she could not be saved. Perry competed the mare at small tour level at two CDI's: at Vidauban in 2012 and at Hartpury in 2013. The duo made the transition to national Grand Prix level in Great Britian in 2014. Their last show together was the 2014 British Championships in September, where they finished 10th in the Intermediaire II and 16th in the Grand Prix.

On a brighter note, Anne Marie Perry is engaged to be married to her partner Phil Cowan on 6 June 2015.

Marlies van Baalen's rising Grand Prix horse Zigeuner DVB suffered from a colic attack on 11 May 2015 and had to be operated on at the equine clinic in Utrecht. He is currently recovering well at the clinic. The 11-year old Dutch warmblood (by Gribaldi x Ehrentusch) competed at the CDI Roosendaal only a few days ago. 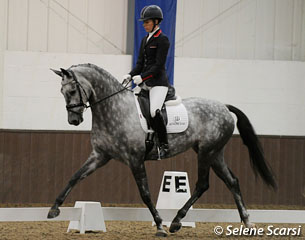 Charlotte Dujardin and the Dutch warmblood mare Florentina (by Vivaldi x Rubels) won the Potential International 5yo class at the Addington Premier League show with a score of 79.4%. Dujardin acquired the grey mare at the 2012 Brightwells Auction.