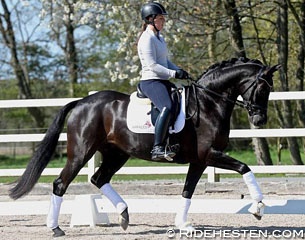 After the first two selection trials on the weekend of 2 - 3 May 2015, Danish judges Birthe Lyder and Jesper Holst Hansen were able to create the beginning of a long list of horses that are in the running for Danish team selection for the 2015 World Championships for Young Dressage Horses in Verden, Germany, on 6 - 9 August 2015.

A special two-day observation trial was held on 2 - 3 May for young horses which have not yet stood out on various competition circuits last year but of which the owners/riders believe they need to be assessed by the selection panel for Verden particaption.

At the observation trial in Vilhelmsborg on Saturday 2 May 2015 eleven 5-year olds and two 6-year olds were presented. The riders had to do the preliminary test in from of the selection panel. Four horses were picked from this group.

At the observation trial held at stud farm Atterupgaard on Sunday 3 May the judges picked three 5-year olds and four 6-year olds to be submitted to the long list:

The next observation trials for young horses, which have been invited by Danish based breed associations and which have already stood out in competition, will take place on 23 - 24 May. The third trial will be on 22 June, followed by a finals on 13 and 14 July in Vilhelmsborg where the team will be team picked.